By Phil Busse, with reporting from Jordon Lindsey 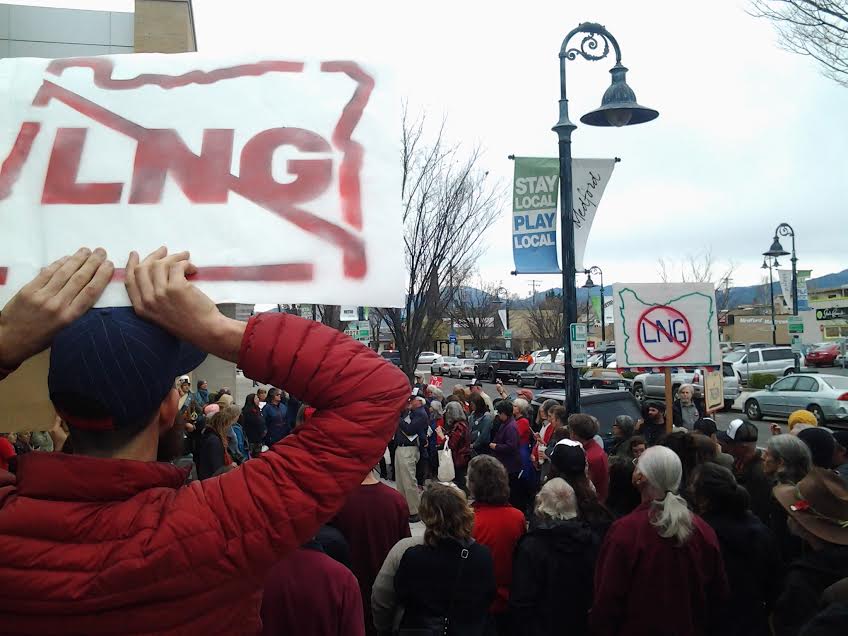 The chanting last Thursday was contagious. About 150 protesters gathered at the Medford Public Library, there to shout down a proposed pipeline that would carry liquefied natural gas (LNG) some 220 miles across the southwestern corner of Oregon.

“Frack it up. Frack it down. Get the frack, outta town,” they shouted. And then, switched up to another cheer: “Hey-hey, Ho-ho, LNG has got to go!”

The rally against the proposed LNG pipeline began in the late afternoon, gathering outside the library where Veresen, the Canadian corporation proposing the pipeline, was holding its third so-called open house to present reasons why the project is good for the region. To secure federal and state permits to construction, Veresen must host a series of public comment opportunities.

Before entering the library, an intermittent rain did little to dampen the crowd’s spunk, and speaker after speaker took to a bullhorn to list reasons against the pipeline: It cuts across tribal lands; it cuts across rivers and farmland and threatens plant and animal life; it could be a major source of gashouse gas emissions, especially when there are cleaner alternatives.

Flags waved, and signs were hoisted towards the clouds, and passer-bys in cars honked in solidarity.

While environmentalist and ranchers don’t always line up on the same side of arguments, the LNG Pipeline has brought together those factions. “They’re stealing American property to benefit foreign countries,” one Roseburg-area rancher told the Messenger. He said he was offered $14,000 for a two-mile section of his land, which he scoffed at the low-ball offer. He has plans to pass his land down to his son and grandchildren, and is concerned about the future property value generations from now.

With a sense of deja-vu, the LNG pipeline is back for its third attempt at placing a pipeline that will run diagonally all the way from the California border near Klamath northwest to Coos Bay. Construction permits have been rejected twice before by Federal Energy Regulatory Commission (FERC), but shortly after Donald Trump was elected in November, word began to circulate that Veresen planned to resubmit its application to the FERC for approval of the pipeline again—apparently hoping that a change in the federal government’s attitude towards energy sources and global warming may provide an opportunity.

Once inside the library, the presentation by Veresen underscored the David versus Goliath nature of the fight. With projects throughout Canada and the upper Midwest, Veresen is reportedly a $5 billion company—and slick presentations and mitigation plans for wildlife impact seemed more in place in corporate boardrooms than a community library. They even presented a sample section of steel pipe along with the latest earthquake resilient building technology to assuage fears about leaks forming in the pipeline. (It is also reported that the project could cost as much as $7 billion, and the company has bet much of its future existence on LNG’s implementation and success.)

With the public open houses complete, it is anticipated the Veresen will re-submit its request for construction permits to FERC in the upcoming weeks.