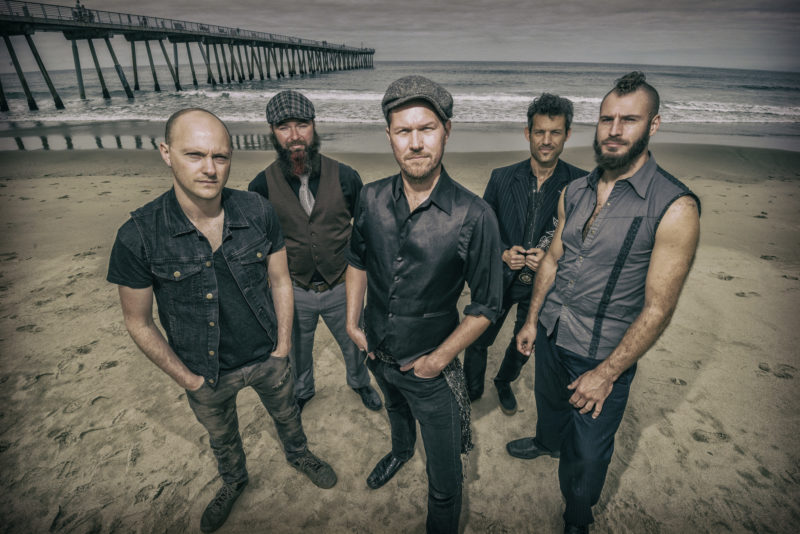 There is no other band that embodies the excitement and diversity of San Francisco, quite like Diego’s Umbrella, who will be performing at the Historic Ashland Armory on Fri., August 18 with (Portland’s) March Fourth Marching Band. Their stylistically eclectic sound includes elements of punk, ska, gypsy-jazz, folk, vaudeville and more, but it is anchored with energetic live shows driven by thumping bass drums, acoustic guitars, violins, and the dance-sweat seeming to drip off the walls. And they’ve becomes something of the city’s unofficial musical ambassadors.

Vocalist/guitarist Ben Leon, bassist Red Cup, guitar/vocalist Tyson Maulhardt, acoustic guitar/vocalist Vaughn Lindstom, and drummer Jake Wood, have been traveling all over the United States, Europe, and the rest of the world; soaking up musical culture like a sponge. Their sound was always eclectic, but has evolved throughout the years.

“We changed a lot,” says Wood. “We started off doing a lot of mellow stuff. A lot of instrumentals. We are a show band.”

The band’s latest album Edjka, is their fifth to date.  And in a sign of the times, the album was released independently.

“You don’t have the pressure of third parties saying, ‘we need some more cowbell’, or some shit like that,” says Wood. “We’ll finish it at our leisure, not trying to meet a deadline. When it’s done, it’s done. We are all happy with it. We all agree it is our best to date.”

Wood recently completed a stint as percussionist for the smash musical Hamilton, during their San Francisco run, and he is eager to get back on the road to promote Edjka. Diego’s Umbrella have booked shows all up and down the west coast, and have brought fans into the fold wherever they go.

“When we tour, we have very little down-time,” says Wood. “Maybe time for breakfast, maybe not in order to get to the next town. Rinse and Repeat. We’ve woken up a little early to spend some time in the river. Or I convince the band we have to go to the Grand Canyon, because we are so close.”

Life on the road can take a toll, and it is somewhat of an anomaly that all five members have remained together throughout the years. But this is more than a lifestyle choice for the member’s of Diego’s Umbrella; this is the gypsy way of life.

“It is the sort of thing that wears you down physically, mentally, and financially,” says Wood. “But spiritually, and if you are the right kind of person, it is the best thing. I look forward to it. Every tour is an adventure. Who knows what will be around the corner.”