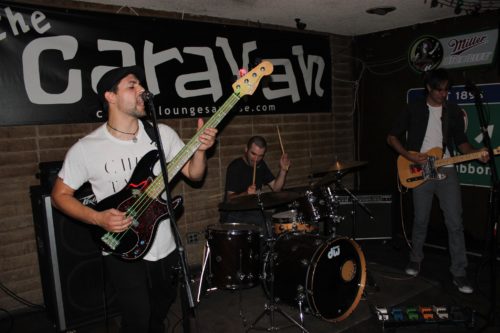 For the past seven years, Late Night District have been grinding away in San Jose’s local music scene—but haven’t ventured much further than the Bay Area. Until now.

Formed by vocalist/guitarist Mark Shriver, the band delivers a high-energy brand of indie-rock, and on Tuesday, Dec. 12, they will play Oregon for the first time, at Johnny B’s in Medford.

“We haven’t really ventured out of the Bay Area,” admits Shriver. “I haven’t even asked for the time-off work. I’ll just call in sick.”

“This will be our first tour,” says Shriver. “I don’t know what the music scene is like in Oregon. I’ll prepare for the worst, and hope for the best.”

The band first started to come together when Shriver met bassist Kyle Visco. After that meeting, the two set out to find a drummer. They had both heard of local drummer Travis Drumm, and actually met him through a chance encounter.

“Drumm is actually his name,” says Shriver. “He’s a lot bigger than the band is. We were lucky to find him. And even luckier that he wanted to join the band. We actually heard about him and ran into him at a bar; and Kyle was like ‘that’s the guy.’ We talked to him and he wasn’t too sure, so we started jamming at the bar.”

Their impromptu jam session that night at the bar, was enough to convince Drumm to join the band.

“He was using two lighters and he was drumming along with us,” says Visco. “He wore away a little area [on the table] where he was playing with the lighter. We were having drummer struggles until we found this guy. We are pretty lucky; it’s pretty special.”

Shriver has been playing in various bands for years and wants the band to be successful. But having a good time is more important than musical ambition.

“I want to take it seriously, but not so seriously that I’m mad at my band members,” says Shriver. “We are doing this because we like it. I just remember being in bands with those kinds of people. And I just remember dreading going to practice; like, ‘what I am I in store for today.”

Shriver and Visco are excited for their first tour, and what the future has in store for the band. But they are experienced enough to remain level-headed and realistic.

“We would like to have a full-length album out,” says Visco. “We like to stay in motion. You know, kind of get the ball rolling. That opportunity to shine; make a name for ourselves. That’s the first plateau I would say. And maybe get an RV.”

“I rented an SUV,” adds Shriver. “So hopefully, it doesn’t break down on us.”