Farm-To-Table Brings Italy Closer to Home: Scarpetta in Ashland is a Locavore’s Heaven 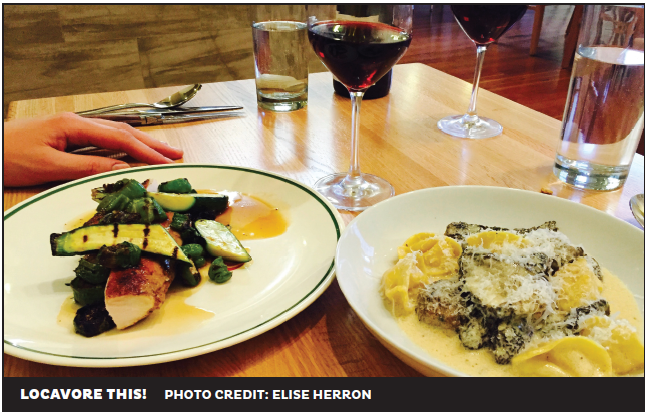 Locavore has become so commonplace in dining that it is surprising that the term is really only a eleven years old, coined by Berkeley-based author and chef Jessica Prentice who fused together two words to describe her month-long experiment in eating only local food; locus, meaning place and vorare, meaning to swallow—a locavore is “one who swallows (or devours) the place,” according to Prentice.

A couple diehard local locavores, Petra Jung and Tony Travanty, have provided similarly impassioned eaters a safe-haven for indulgence at Scarpetta Restaurant in Ashland. In the middle of bustling East Main Street, diners walk through a small corridor between businesses to reach the quiet, lofty restaurant. Painted light ivory and olive, with an open, stainless steel laden kitchen, and un-edged wood tables, Scarpetta’s posh minimalism is given a lively twist with colorful, abstract art pieces, and bright pillowed booths lining the wall.

Late last Sunday evening, two parties dined at up-scale Scarpetta. For one pair of twenty-somethings, it was the first time at the new restaurant. The other neatly dressed couple, seemingly acquainted with the place, toted home a bottle of wine, happily proclaiming to be “just too stuffed for dessert.” The server that night, and part owner, Jung pointed out some of her favorite menu items. On the lighter side, a simple snap pea salad and charred Romano beans. And, on the more decadent end of the palate, duck yolk tortellini, chicken breast cooked in lavender milk, and bone-in pork chops cooked with hazelnuts.

A starter course that set the stage for freshness and simplicity was the crunchy, sweet and thinly cut snap peas, paired with not-too-bitter Tokyo turnips, and topped with a light sprinkle of pecorino cheese and sprouts. A plate of buttery, slightly smoky, grilled Romano beans were balanced nicely with tangy chard stem vinaigrette. Not to go un-noted, the stinging nettle pie with buttery crust and cheesy herb filling was served with show-stealing, bittersweet, tarragon vinaigrette dressed greens.

Befitting a North Italian-themed restaurant—relying less on olive oil and tomatoes—Scarpetta’s pasta offerings are definitely not shy of butter, cheese and cream. Like biting into a butter-filled time bomb, the tortellini is stuffed with rich duck yolk, and topped with a creamy confection of melt-in-your-mouth morel mushrooms and Parmesano Reggiano.

Slightly less butter-laden, the chicken breast displayed Travanty’s cooking style, which according to Jung is “purist.” Moist and tender, the subtle lavender garnish was barely noted, but complimented the salty skin. Grilled Padron peppers were a burst of spicy flavor that added zest to the rich cut of meat, and zucchinis were a crunchy reminder of the food’s farm freshness.

Jung and Travanty relocated to the Rogue Valley for its long growing season and bounty of produce. Primarily lured by the charm of the Oregon coast, the pair ultimately decided Ashland was the perfect place to open their restaurant.

“85 to 90 percent of our food is sourced within a 250 mile radius,” Jung attests of the localness of their menu.

In fact, market-going locals will probably recognize the farms that Scarpetta depends on. Jung says, “Barking Moon farm is where we’ve been getting most of our produce, and By George for our cheese.”

With a menu that adapts to seasonal offerings, and chefs that let freshness speak for itself, Scarpetta is a place to adopt the locavore habit of devouring a place through food.

Farm-To-Table Brings Italy Closer to Home: Scarpetta in Ashland is a Locavore’s Heaven