It’s been a long winter. Most of us are ready to put away our muck boots, slip on some sandals, and welcome in the spring. And for the music festival loving folks of the Rogue Valley, a “holiday” is approaching where they will do just that, rain or shine. 4/20, best known as a day to celebrate our love of cann 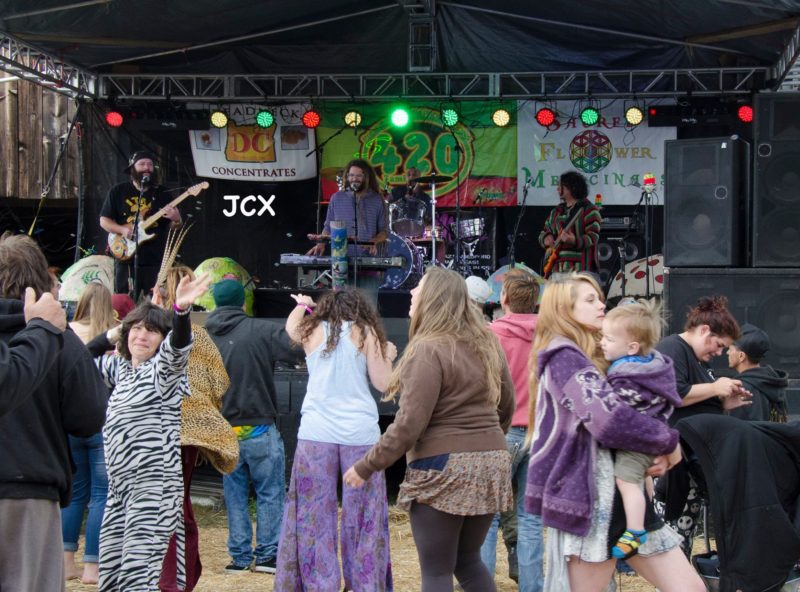 abis, is known to the attendees of the Southern Oregon Family Reunion as the first outdoor music festival of the season.

“Everyone’s been tucked away all winter,” says Paul Maldon, organizer of the Southern Oregon Family Reunion. “This is the first chance for everyone to kick the dust off their shoes, get outside, and have a good time.”

The Southern Oregon Family Reunion, held this year at The Moon Barn, in Williams, is a music and arts festival that dates back to the early ’90s. Like many festivals, it was born with a different name, and a different identity. It’s a bit fuzzy, but sometime in the late ‘90s, Maldon was passed the torch, and began to organize the event, growing it into what it is today.

“It started with this guy 420 Dave, out in Selma,” says Maldon. “He used to throw a crazy 4/20 celebration. This festival is totally different than it used to be back then. Those were just crazy, underground keg parties.”

These days, The Southern Oregon Family Reunion is, well, just what it sounds like. A very family friendly festival, where long-time friends can come together every year to enjoy each others’ art, music, and company.

“To me, that’s what it’s all about,” Maldon says. “To have a festival where people feel safe enough to bring their children, and to let them run and play. It’s about good times, good vibrations, and everyone coming together to have a safe, good weekend.”

This year, 25 bands will play over the festival’s three days. Genres range from rock, to reggae, to jazz, to funk. Off-stage, a fire-round drum circle will likely run all night long.

“Our performance this year will include a gaggle of sword swallowers, a barrage of Mongolian contortionists with cool haircuts, and of course Henry the Horse will dance the waltz!” exclaims the bandmates of 100 Watt Mind, SOFR’s Saturday night headliners. “As always, we hope to have a good time and to get silly with all the new friends we’ll make there.”

100 Watt Mind is one of many returning bands playing the Southern Oregon Family Reunion this year.

Another returning act, Frankie Hernandez, a prominent musician in the Rogue Valley, has played SOFR with his band every year, since 2011, and says that cherishes the event as it is one of the few times a year he gets to play for his kids.

“People always say, ‘Oh your kids must love your music,’ but I’m mostly playing in bars, so my kids can never really come,” says Hernandez. “That’s what I love about the Southern Oregon Family Reunion, It’s a time I can play for my family.”

For Hernandez, Southern Oregon Family Reunion isn’t the only festival he’ll attend this year, but like so many members of the SOFR family, it holds a unique space on his roster.

“It’s cool to see the community that has sprouted up around this festival” Hernandez says. “There are so many talented people here, that I love so much, and I love when we can come together and play music for the people that care about it the most.”