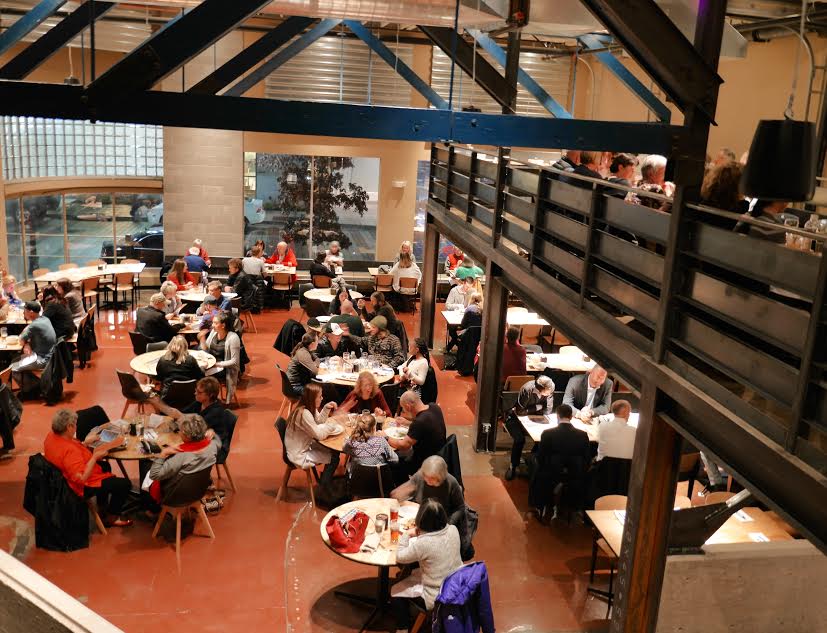 It is perhaps ironic that the Common Block Brewing Company, a key addition to the ongoing revival of downtown Medford, is located in a building which helped erode downtown in the first place. The new brewpub occupies the 1947 Leever Motor Company building on 5th Street. Here, Rogue Valleyers purchased the Packards or the Dodges needed to escape the downtown congestion for suburban homes and shopping centers. Any driver enduring a trip to a big box power center along OR 62 might regret the choices of our forebears. Reversing course for Common Block could ease one’s suffering.

The only reminders of Detroit steel in the art-deco dealership building are historic photos in the entry and the preponderant steel beams welded by owner Alex Amarotico. “If you talk to Alex,” quips Common Block’s Director of Marketing, Rachel Konig, “he knows every square inch of the building.” Patrons of Amarotico’s first brewpub, Standing Stone Brewing in Ashland, will recognize the style.

They will also recognize the Amarotico (CBBC is owned by both Alex and his wife, Danielle) attention to detail and hospitality. After negotiating the bustle of the open kitchen and opposite bar, diners enter the soaring, window-wrapped showroom. The former home to coupes and sedans now holds tables hand-built with sustainably-produced AraucoPly plywood and filled with downtown business-people, families with children, and groups of friends even on a wintry Monday night. Perhaps they are discussing the merits of the 17 micro-brews, 11 wines (seven from Oregon), or three hard ciders on tap where salesmen once praised power steering systems and automatic transmissions. The menu, developed by Chef David Georgeson, has standard pub features–burgers, wood-oven pizzas, sandwiches–and custom options like the Farmstead Pizza with lamb sausage, roasted pumpkin, goat cheese pesto and arugula.

For the moment, Common Block contracts with Wild Ride Brewing of Redmond to produce Brewer John Donehower’s lone contribution, the Common Block Pale Ale. He will have another year to perfect his line-up while CBBC awaits delivery of its brewing system. Medford motorists and pedestrians alike will have ample opportunity to test drive the Block while awaiting the in-house brews’ arrival next model year.