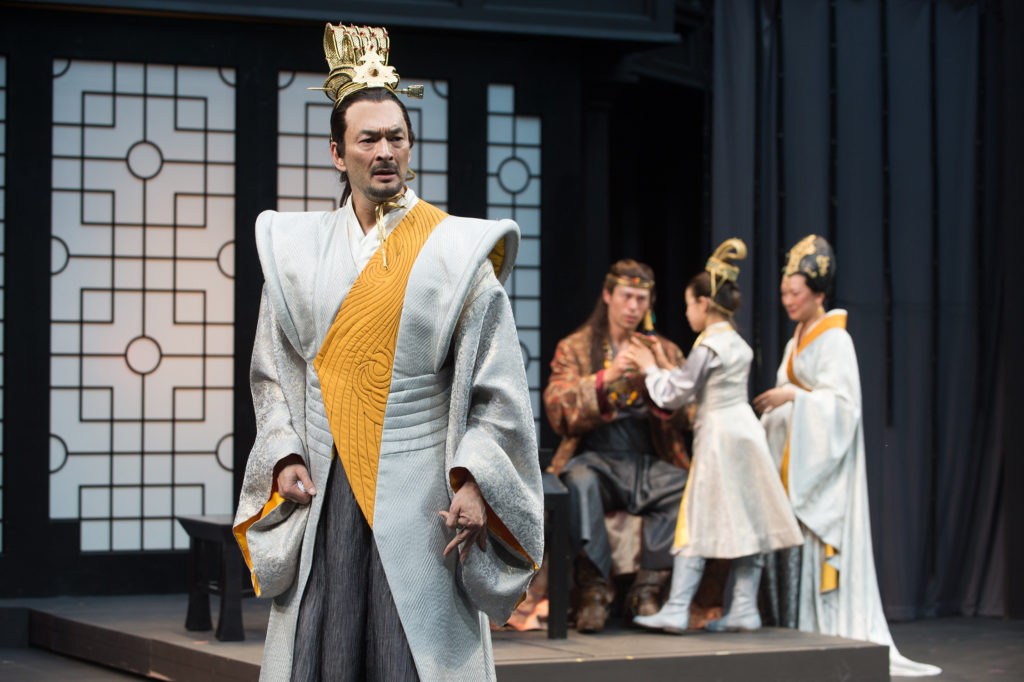 The Winter’s Tale is a story about jealousy, friendship, and loyalty as a king goes mad, fearing that his pregnant queen has been unfaithful—and for this season’s production, director Desdemona Chiang sets the story in dynastic China. It is both an opportunity to present the characters with a certain unique elegance of Chinese royalty, but also a chance to show that the play’s themes are not bound by a single culture.

Also, this season, one of the most esteemed and popular productions from Oregon Shakespeare Festival is not Shakespeare at all, but a spunky and probing story about two Vietnamese refuges in 1975 transitioning into America.

The festival is a kaleidoscope of talks, lectures and, of course, stage productions and new play readings. More specifically, it is a standard conference with a few days of meetings and a trio of powerhouse keynote speakers, including Roberto Uno, the Director of Arts in a Changing America, delivering the provocatively-titled lecture, “Neutralizing Yellow Face.” Simultaneous to these presentations, and then running for the remaining week, there is also a whirlwind of performances; sort of, show, don’t tell, in terms of displaying what the organizers hope to explain is the changing tenor of contemporary theater.

Although the fifth year for the festival, it is the first time it is being held at OSF—and, as such, an acknowledgement about the changes in powerhouse American theater and recognition what role social justice has in mainstream productions.

The concern that Asian theater—in terms of actors, themes, productions, and all of the above—is underrepresented has been simmering for decades. Often marginalized, Asian theater has often been consider a niche for its themes and content—and even when stepping into more mainstream productions, ignored both Asian audiences and actors. In 1990, for example, actors took to the streets in New York to protest the lack of Asian actors in Miss Saigon, a play that offered plenty of salient roles for Asian actors—and, as recently as four years ago, a 2012 study about New York theater found that Asian-Americans actors represent only 2 percent of the role in Broadway plays, although Asian-Americans make up 12.9 percent of the region’s population.

ConFest both addresses some of those deficiency, but also offers platforms for understanding where American is heading—and explaining why it matters.

In an interview with OSF’s Communication Manager Julie Cortez, ConFest co-organizer Leslie Ishii explained why this underrepresentation, both in terns of actors and productions, is so important. “Just to recognize yourself onstage is huge,” she said. “It affirms you have a place in the world.”

The festival will showcase several plays, as well as readings for new works. There are an equal number of traditional productions as there are more bombastic and experimental stage shows, like the spoken word Eleven Reflections on September and a one-woman presentation The Wong Street Journal that mixes hip-hop and TED-lecture-styled charts. Falling somewhere between the traditional and experimental is Empire of the Son, a story about an estranged father and son, who both are popular radio broadcasters, one in Hiroshima, the other Vancouver, B.C.; the story is told through a series of audio interviews by former CBC broadcaster Tetsuro Shigematsu with his father, and performed against a backdrop of video footage. Hot Asian Everything kicks off the event with a whirlwind evening featuring steampunk cowboys, a murder-mystery, and Cambodian ballet. As well, there are readings from five new plays.

Full Confest details and schedule are available at caata.net.