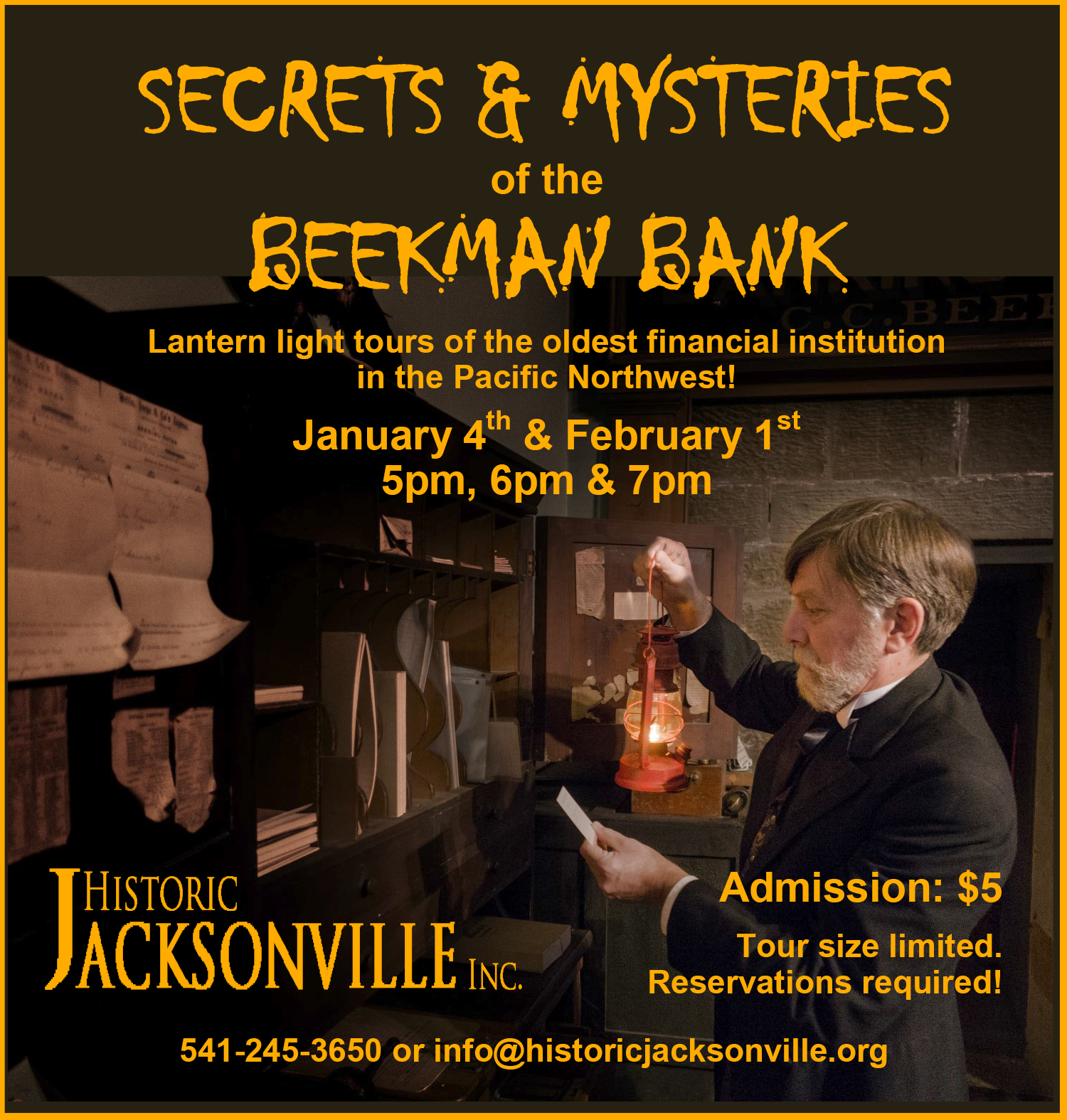 Explore the “Secrets & Mysteries of the Beekman Bank” on
Saturday, January 4, and Saturday, February 1, when Historic Jacksonville, Inc. again opens the
oldest financial institution in the Pacific Northwest for evening lantern light tours. Established in
1856 as a gold dust office, the current 1863 Beekman Bank building was constructed by
Cornelius C. Beekman at 110 W. California Street in Jacksonville when he became the town’s
Wells Fargo agent. Over $40 million in gold crossed Beekman’s counters during Jacksonville’s
heyday in the 1800s—equivalent to almost $1 billion in today’s currency!
The mint was in San Francisco, yet Beekman was never robbed. How did he safely ship his gold
under the noses of the highwaymen? Fires destroyed all the wooden buildings surrounding the
Bank. Why is the building still intact? Beekman ordered large quantities of opium. Was he a
drug dealer? Beekman was supposedly happily married. Why was there a ring in his safe
inscribed “Lois to Beek”? What was Beekman’s “office” really used for?
Regional historian Ben Truwe pursues these and other secrets and mysteries in 50-minute lantern
light tours beginning at 5, 6, and 7 p.m. each tour night. Truwe has used his opportunities as a
Bank docent and skills as a researcher to explore the building and original documents, making
discoveries of secrets lost with the last Beekman.
Admission is $5 per person with proceeds benefiting the preservation and maintenance of this
regional landmark. Tours are limited to a maximum of 12 people and reservations are required.
Reservations can be made by calling Historic Jacksonville, Inc. at 541-245-3650 or e-mailing
info@historicjacksonville.org.
Cornelius C. Beekman was the wealthiest and most prominent of Jacksonville’s pioneers. From
a humble beginning as an express rider carrying mail, packages, and gold over the Siskiyous to
Yreka, Beekman built a business empire of banking, insurance, mining, and real estate interests.
He was also a dedicated public servant, at various times serving as Mayor of Jacksonville,
Republican candidate for Governor of Oregon, Grand Master of the Masonic Lodge, and Regent
of the University of Oregon.
Beekman closed and locked his Bank in 1912. When he died in 1915, he specified in his will
that the Bank be preserved as a museum. Today, the City of Jacksonville and Historic
Jacksonville, Inc. strive to honor both his request and his legacy.
The Beekman Bank Museum is located at 110 W. California Street in Jacksonville at the
corner of California and North 3 rd streets. For additional information, contact 541-245-3650
or info@historicjacksonville.org.