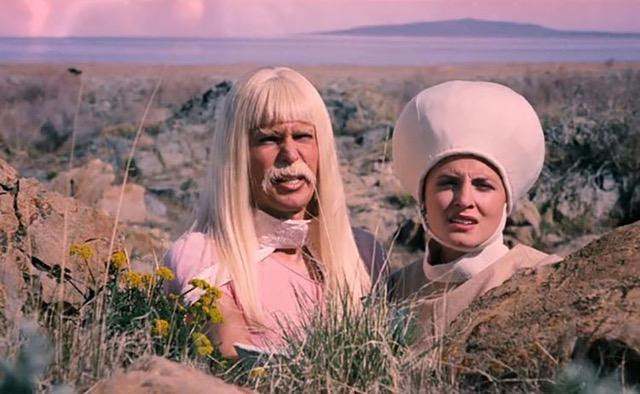 -THE BAD FILM SOCIETY –
GETS UNSELFCONSCIOUSLY JUVENILE AND OVERWHELMINGLY QUIRKY

The public is invited to the next Bad Film Society meeting on Sunday,
MARCH 1ST at 6PM in The Ashland Elks’ Dungeon.

The feature will be the freakishly surreal GENTLEMEN BRONCOS
made by the Mormon folks behind Napoleon Dynamite. A lonely
home-schooled teen’s aspirations of being a sci-fi writer are turned
upside down when he goes to a writers camp and his idol, a washed-
up pompous fantasy author steals his story about a yeast-loving
redneck space warrior named Bronco. But then the teen’s dream
come true when his quirky pals film an ultra-low-budget amateur
version of his story. Sam Rockwell is Bronco in the tacky and
psychedelic film within the film. Jemaine Clement of Flight of the
Conchords is over-the-top as the New Age meets Supersize Ego
meets shaman wannabe failed writer. Everything and everyone is
super geeky in this movie; the bizarre wardrobe, the haircuts, the
dialog, the sets. It’s best to watch this film after not sleeping for a few
days.

Prior to the feature, fascinatingly strange shorts will be shown
including brain melting cartoons, rare trailers for films too bad to sit
through, cable access junk and Karen Black battling the most valuable
prop in horror history!

Members should bring a dish for the potluck dinner starting at 6PM.
Some bottom feeders just come for the great food! It sure beats
dumpster diving!

The entrance to the Ashland Elks Dungeon is on Will Dodge Way (the
alley between E. Main and Lithia Way and 1st and 2nd Sts.) You’ll
see the “Elks Dining” sign. The private Elks parking lot will be open
for use. To park, enter on 2nd St.

A $4 donation is requested to support The Elks and all the good they do.

The Ashland Elk’s Dungeon
Will Dodge Way (the alley between E. Main and Lithia Way and 1st and 2nd Sts.)
Ashland, OR United States + Google Map