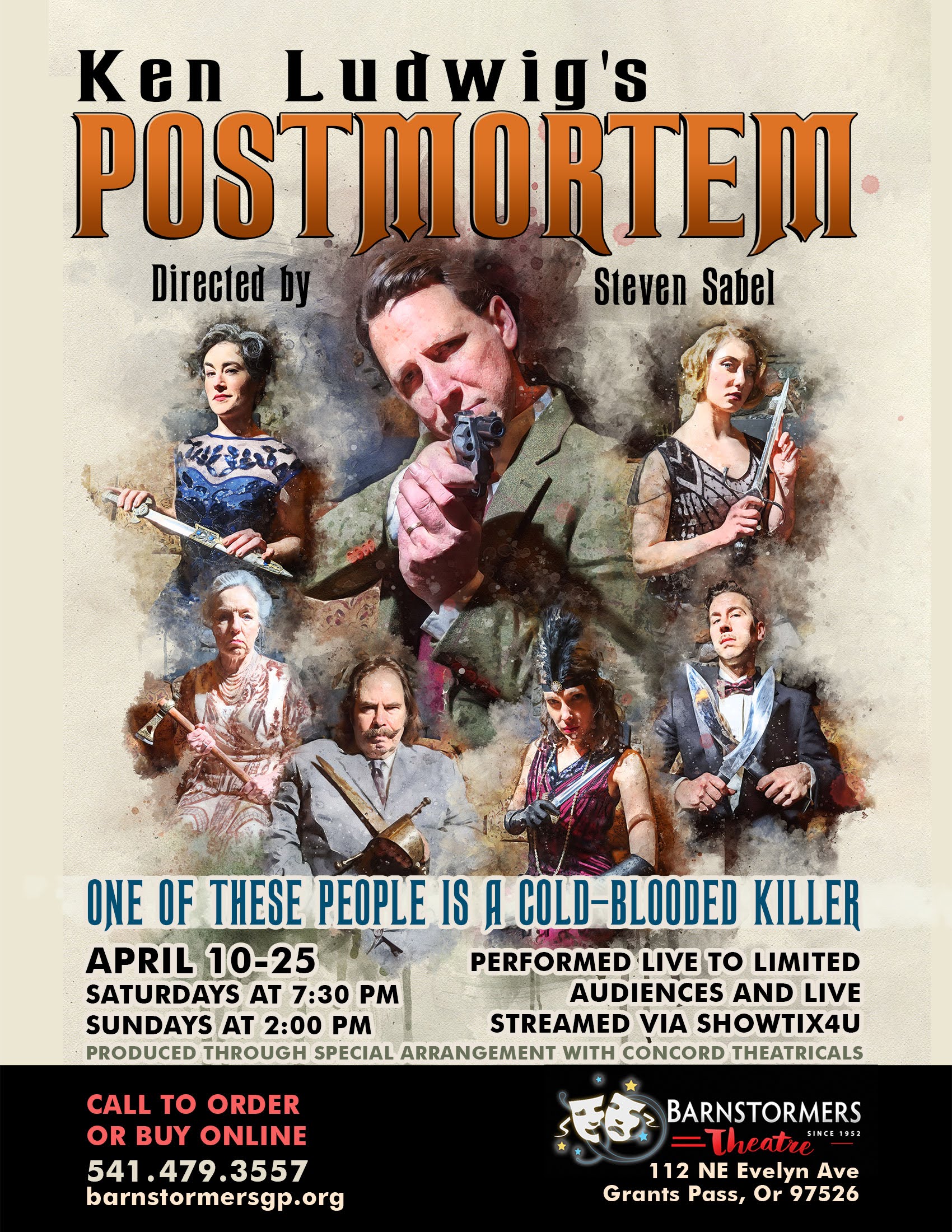 Tickets are now on sale to live stream the first play of 2021 on the Barnstormers stage
and screen, Ken Ludwig’s murder mystery “Postmortem,” directed by Steven Sabel.
“Postmortem” will perform 7:30 pm Saturdays and 2:00 pm Sundays, April 10-25. Performances will be live streamed via ShowTix4U, and will hopefully be performed to limited live audiences as well. To live stream the show from the comfort of your own home, please visit the Barnstormers ShowTix4U event page: https://www.showtix4u.com/event-details/47234 . Tickets are available for 1-2 viewers for $15, 3-4 viewers for $30, and 5 or more viewers for $50.
The play is set in the early 1920s in the castle-like home of famous actor, William Gillette, best known for being the first man to portray Sherlock Holmes on the theatrical stage. When Gillette invites some of the actors from his Broadway production to spend the weekend at his home in Connecticut, the audience soon realizes that there is a murder to be solved. Performed on an eccentric set and featuring period costumes, “Postmortem” is filled with intriguing characters and suspense as any one of the weekend guests could be a cold-blooded killer.
“We are very excited to be in rehearsals again,” said Barnstormers executive director Annie Sabel. “Our recent hiatus has provided us time to take care of some maintenance at the theatre, and now we will be able to come back strong, with a thrilling play by a popular playwright.”
Barnstormers has previously presented three of Ken Ludwig’s works, “Lend Me A Tenor” in 2007,
“Moon Over Buffalo” in 2011 and “The Game’s Afoot” in 2017. In 2016, Barnstormers produced the
original “Sherlock Holmes” by William Gillette and Sir Arthur Conan Doyle that is an integral part of the “Postmortem” plot.
“Barnstormers has a rich history of producing Sherlock Holmes, murder-mystery style plays, and we look forward to adding “Postmortem” to the fold,” continued Sabel. “We invite our audiences to play detective with us as they figure out which character is the true killer.”
Viewers should be advised that there are gunshots in this production. “Postmortem” is recommended for ages 13 and up. For additional information, please call (541) 479-3557 or visit www.barnstormersgp.com.