Eating Pants Required: A Preview of the Ashland Culinary Festival 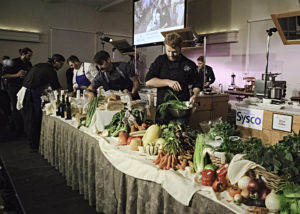 The Ashland Culinary Festival will kick off Thursday, November 3 and continue through November 6. Now in its 10th year, the Festival attracts 1,000 to 1,500 event attendees per year, according to Kelsey Frantz, Projects & Special Events Coordinator for the Ashland Chamber of Commerce, who organizes the event.

If one were to find themselves hungry for Ashland products or thinking, “Oh, I wish I knew how to make a French Comice Pear Tart” this weekend, then they would be in luck. The four-day event features local food and drink producers, makers, chefs, and mixologists like Grizzly Peak Winery, Storyville Coffee, and Serra Vineyards. “This Festival showcases the Chefs and Restaurants who work so hard year-round to bring delicious cuisine to the Valley,” says Frantz.

While we wouldn’t take the liberty to judge anyone who would be content with the eating and drinking portions of the festival, of which there will be many, the weekend’s lineup also includes a chef competition, demos, workshops and more. This year’s roster will showcase three new events: a six-course dinner on Thursday night, a mixology competition on Friday during the Culinary Kickoff, and a youth cooking competition on Saturday.

The six-course dinner will serve as the festival’s inaugural event. Those holding tickets, which had to be purchased by October 25, will experience a dinner prepared by local chefs ($85). The meal will be paired with wine or beer. Chefs participating include Franco Console of Larks Restaurant, James Williams formerly of Omar’s Fresh Seafood & Steaks, Josh Dorcak of Scarpetta Prima, and Chandra Corwin of Cucina Biazzi.

The weekend’s next official event is the Culinary Kickoff, which occurs Friday night. As of press time, tickets were still available ($25 in advance, $30 at the door). Attendees can nibble on small bites, sample wine and catch live music. Four local mixologists will participate in a showdown to be crowned Ashland’s Top Mixologist.

Saturday, pick between one of three workshops. The pear tart mentioned earlier will be part of a workshop taught by Denika Voget of Coquette Bakery. Other choices are The Health Benefits and “How To” of Bone Broth with Kristen Lyon and All Things Chocolate! with Branson’s Chocolates. Additional workshops on wine, edible beauty, granola gifts, and stress-free breakfasts and brunches will be taught Sunday morning.

The main attraction, “Sip, Sample, and Taste,” happens from noon to 5 pm both Saturday and Sunday. Sip, Sample, Taste-goers will have the opportunity to taste their way through products from 30 different vendors while watching participants compete in the Top Chef Competition. Area chefs will face off in three groups Saturday and Sunday, the winners of each group will then go head-to-head Sunday afternoon.

Weekends can be particularly hard times for chefs to get out of the kitchen, but many local chefs think it’s worth it. Mario Chavez, chef and owner of Onyx Restaurant in Jacksonville has participated in the competition for the last two years. “I love to compete,” he says. “There’s not a lot of opportunities that chefs get to compete throughout the year other than just nightly in the kitchen.” He adds, “It’s fun to be judged…and see what kind of stuff people pull out.”

Neil Clooney, owner of Smithfields Restaurant & Bar is also making time to send his chef, Morgan McKelvey. Clooney won the competition in 2008 and 2009, going on to win the Bite of Oregon Iron Chef Competition both of those years. He’ll also be participating in the dinner Thursday night. The reason he likes the festival? “After working through the busy tourist season, it’s a chance for everyone in the industry to get together on a fun-filled competitive weekend.”

Most of the weekend’s festivities will be held at the Ashland Hills Hotel & Suites. However, many of the workshops will be held off-site. Individual events are $15-$85, multi-event packages are available as well. To find out more or purchase tickets visit ashlandchamber.com.

Eating Pants Required: A Preview of the Ashland Culinary Festival