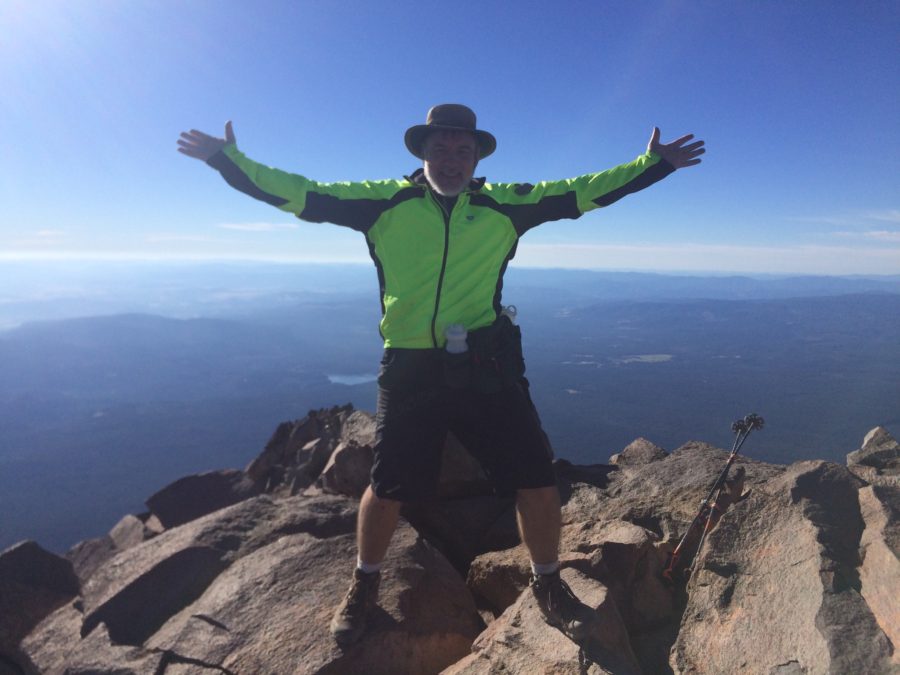 “I realized I was part of the scenery,” says Brian Heron, 57, a cyclist, an outdoor enthusiast, a pastor, a mystic. He describes looking out over a Mendocino vineyard after cycling to the top of a hill.

“There was no observer and observed. I was part of the painting. It was a feeling of incredible oneness, no separation. It lasted just a few seconds, but I’ll never forget it.”

This experience is what Heron hopes to share with others, through a Rogue Valley group he has formed called Earth Adventurers.

Earth Adventurers is “for anyone who loves to hike, bike, kayak, backpack, snowshoe, etc. and connect to the sacredness and beauty of the natural world,” reads the description on MeetUp, the social website where the group is hosted.

Terri Knuth, 56, attended the first hike that Heron organized at Water’s Creek Interpretive Trail in Grants Pass on July 31, shortly after the group was founded on July 19 of last year. “I liked how Brian is inclusive of a lot of people and how he had a vision,” she says.

Knuth continues to attend Earth Adventurers events, because the group’s aspirations resonate with her. “It’s not just, ‘I’m gonna go and take on the Earth,’ but I’m going to tie myself into this spiritually,” she says.

She describes her own experience with nature in the Aspen Highlands of Colorado, where she lived before moving to Merlin, Ore., four years ago. “I could feel the force of the mountains in me, and it brought me to my knees. The you that you think you are disappears. It’s all just one thing.”

While many in the group do identify themselves as spiritual, and Heron himself is an interim pastor at Bethany Presbyterian Church in Grants Pass, the group is all-inclusive. “I really respect how Brian has been very non-denominational and non-religious in the spirituality. Since I’m not Christian myself, I’ve appreciated that,” says Christine Chumbler, 47, of Jacksonville.

Chumbler has been to several Earth Adventurers events and says she also appreciates the connections formed. “In the political environment that we’re in now, it is always good to create safe spaces. While I certainly see the value in having conversations where your beliefs are challenged, it’s also just nice to be around people that you don’t have to explain yourself to,” she says.

Chumbler also likes the group’s focus on honoring the Earth. “It’s not just recreating but includes an aspect of respect for the Earth,” she says. “Brian has talked about the possibility of doing trail maintenance or litter pick-up, more service sort of activities.”

Events organized so far have included a hike, a bike ride, Earth-themed movie viewings, a litter pick-up, a Winter Solstice celebration, dinners and snowshoeing. The activities are held all across the Rogue Valley, and Heron often helps coordinate carpooling among members.

As for his role in the church, Heron has assisted Bethany church and others with understanding their diminishing congregations. “There’s a whole other culture out there who is experiencing the sacred in a different way, and they need to be aware of that,” he says. “I think our religious culture is moving toward mysticism again, returning to its ancient form, where it’s not belief-oriented but experience-oriented. You have to allow people to have their own experience.”

Heron is the author of Alone: A 4,000 Mile Search for Belonging, the story of his 2011 bicycle adventure across the U.S. after a series of personal and professional losses. It is available at Oregon Books in Grants Pass, on Amazon.com and on his website, pedalpilgrim.com. He is currently working on a second book, Rome to Rumi, about his bicycle pilgrimage from the head of the Church in Rome to the heart of mysticism in Konya, Turkey.

To join Earth Adventurers or to find out about upcoming events, visit meetup.com/Earth-Adventurers. The group currently has 144 members and will definitely be doing something for Earth Day on April 22.