Two years ago the Rogue Valley Messenger suggested public safety as a promising area for drones. And since that time, the idea has proven prescient, with police and fire departments in Eugene now starting to use drones in various capacities, like assessing crime scenes and evaluating incidents. But as was also hinted at in the article posted here two years ago, drone use has exploded in other ways as well, ultimately resulting in a variety of applications and activities – many of which are tied to sports. 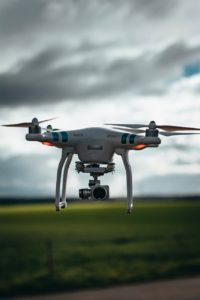 Drones For Sports Coverage: Most impactful of all might be drones’ utility in sports coverage. Already, Fox Sports has offered previews of drone-assisted broadcasts of golf. The sports channel also used UAVs to shoot footage for its FIFA Women’s World Cup coverage all the way back in 2015! Now, the same company is said to be looking for more ways to incorporate drones into its coverage, specifically in football, but in basketball and baseball as well. There are obviously logistical challenges, such as the limitations of indoor areas or outdoor stadiums that might be close to airports. But the wheels have been set in motion for drones to gradually assume a much bigger role in sports coverage, perhaps in the next five years or so.
Drones For New Sports: For those who haven’t heard, “drone racing” is now its own, budding sport. In said sport, UAVs zig and zag through set courses (both outdoor and indoor), controlled by pilots using advanced controllers. Organized indoor competitions have actually spawned a whole new league – the Drone Racing League – which has become hugely popular. The DRL is about to enter its fourth season, and has a broadcasting deal with NBC, as well as agreements in place to stream on social media and video sites (including Twitter and China’s Youku).
The DRL appears to be straddling a line between cult appeal and mainstream sport status – but is clearly trending toward the latter. Some of America’s online gambling sites are already exploring book listings for the sport, which would allow an expanding community of fans to bet on races on a regular basis. And the aforementioned broadcasting deal should make the fourth season the DRL’s biggest yet. It may well be that in a few more years we consider this to be a sport on par with second-tier sports like boxing, golf, and Moto GP – or at least on a level with eSPorts.

Drones For Sports Training: Drones are also now being used in sports training, with the Dallas Cowboys of the NFL having been among the first professional teams to use UAVs for said purpose. This practice, in fact, began back in 2015 when the Cowboys started filming segments of their practices using drones. Cowboys coach Jason Garrett has said that he got the idea of using drones from Southern Methodist University head coach Chad Morris, who had done the same for his division one college program. Garrett explained that he took to the practice, though, because drones could provide wide-angled shots that gave him and his staff opportunities to break down plays “from behind to see all 11 guys on offense and all 11 guys on defense but from a closer angle.” In that way, Garrett noted, “You can see hand placement. You see where they have their feet, where they have their eyes. I think that’s important. You can look at that and coach them better being that much closer to the action.” It’s easy to imagine other coaches in all sorts of sports finding similar benefits to this sort of training application.

If anything, the use of drones in sports further highlights the versatility of drone technology. We will continue to see this versatility open more doors in the future, such that drones will become ubiquitous in a way we can barely imagine today.