Home»Feature»Drinking By The Decades: A Century Long Look at Cocktails
Feature

As much as music and fashion, cocktails reflect the sense and sensibility of an era—the exuberance of the roaring 1920s in bubbly and playful drinks like a Bee’s Knees, or the stark elegance of the 1950s in a gin martini. For the Messenger’s annual cocktail compass, we pointed ourselves towards some of the region’s finest bars and bartenders, and considered them through the different attitudes of each decade from the past century. 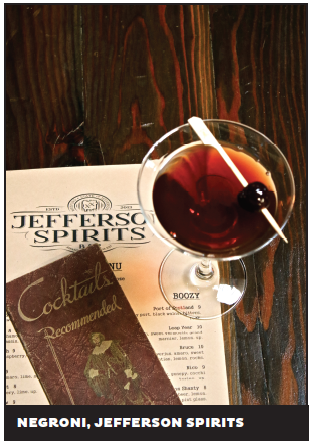 After decades of vice sandwiched the turn-of-the-century—oh, you know, drinking, gambling, riverboating—a moral chill went across America in the form of the 18th Amendment. Yes, Prohibition,  perhaps the worst social experiment ever.  Instead of the desire act of cleaning up America’s collective act and liver, instead this decade was a rollicking Jazz Age, with its Gatsbian parties and speakeasies—and plenty of celebratory, playful drinks that snubbed Prohibition. Invented in Italy in the years around World War I, the Negroni came back stateside with American soldiers. 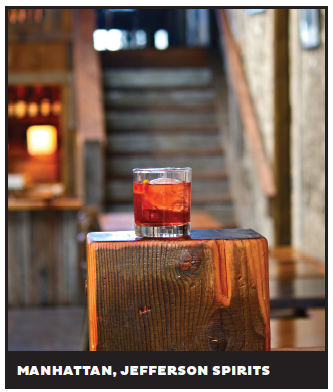 In signing a federal bill in 1933 to roll back Prohibition, President F.D.Roosevelt wisecracked, “I think this would be a good for a beer.” More than just beer—and rebooting the hops, barley and wheat industry in America—and in spite of the Depression, the 1930s saw the return of classics like the Manhattan and Old Fashions, as well as contemporary drinks like the Side Car, which gave a nod to the new car culture. To recall the sweet but sour era of the 1930s, check out the Manhattan at Jefferson Spirits (141 S Central Ave, Medford), a Side Car at Liquid Assets (96 N Main St #201, Ashland), or celebrate the rum-running business from Cuba that began to boom in the 1930s with a signature rum car at Peerless (265 4th St, Ashland). 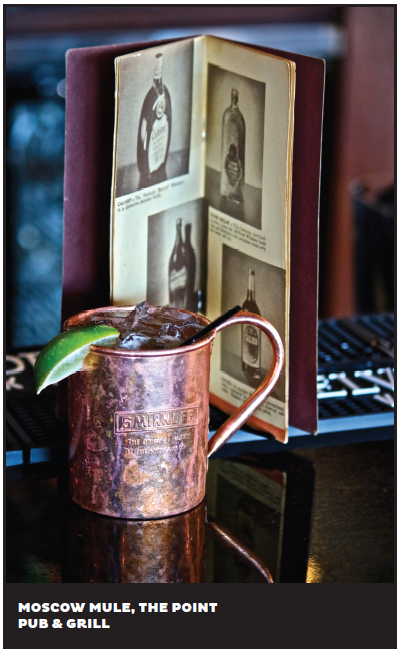 Perhaps it is ironic that the Moscow Mule has its roots in the decade that witnessed the U.S.S.R. capital also become the epicenter of America’s greatest Cold War enemy. A refreshing vodka drink served in its cooper cups, the Moscow Mule was, in spite of its name, is not a century old drink for Russians, but instead either (depending which historian you ask): A, the brainchild of two enterprising young men in LA—the owner of a newly introduced Smirnoff vodka and Jack Morgan, the owner of Cock n’ Bull pub on the Sunset Strip; and, B, a stunt concocted by a cooper mug salesman in New York. Regardless, the drink was popular in the 1940s, but faded over time until its current resurgence. In the past decade, the Moscow Mule has stormed into popularity, with sales now rivaling those for Bloody Mary and mojitos. A great summer drink. Found at Brickroom, (35 N. Main, Ashland) or The Point Pub & Grill (311 E Pine St, Central Point).

Like the 1950s themselves—seemingly simple, but ready to splinter into cultural multiplicity—the martini is a carefully balanced elegance, but also one that has been, at times, the whole story, and at other times, just the beginning of an idea, as the martini since the mid-century has spawned a million derivations, from the Stab Wound Martini at Immortal Spirits to a something more traditional at Omar’s (1380 Siskiyou Blvd, Ashland). Although the martini often has fallen out of favor—like in the 1970s, as it was seen as a bland bourgeois drink of The Man—it has returned back into popularity just as often, like riding the coattails of “Mad Men” back into favor.

There is no single drink that could capture the diversity of the 1960s, that started with the New England top-buttoned properness of the Kennedys and ended with the jaybird-naked-but-my-love-beads Woodstock. Remarkably, Alchemy has a robust menu that reflects this spectrum—with classics, to poetically named drinks like “Play it, Sam” (mezcal, ginger, lemon thyme) and the William S. Burroughs (bourbon, espresso, apricot).

But, please note (as told to us by Jen Akin, Bar Manager, Alchemy Restaurant & Bar): “The William S. Burroughs is a cocktail inspired by cuisine. The Play It, Sam is a drink inspired by the ingredients themselves. Both drinks earned national recognition this year. Unfortunately, neither of these drinks are on our current menu. For a summer Manhattan variation, try the Elemakule and the Sea: Rittenhouse 100 proof Rye Whiskey, Dolin Blanc Vermouth, Averna, Ginger Liqueur, and Elemakule Tiki Bitters. (Elemakule means “old man” in Hawaiian) As for a tequila cocktail, try the Charley Bates, a riff on a traditional mule with tequila, mezcal, Benedictine, lemon, cardamom bitters and ginger beer.

Like so many trends in the 1970s—macramé, Earth, Wind & Fire, beef fondue, the pet rock—the drinks deserve to be cultural punch lines, as opposed to something you might really order. A pina colada? About as welcome as a midnight walk in the cold rain. 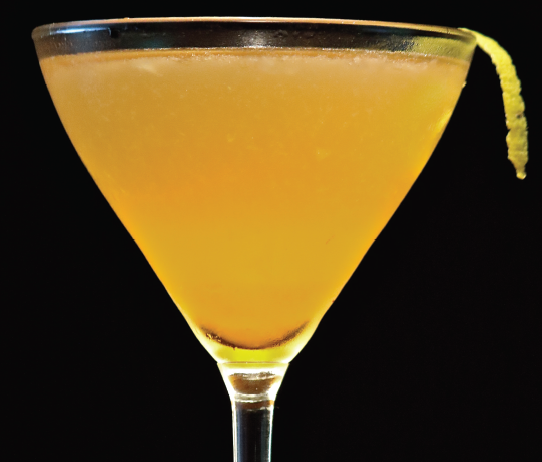 With Benetton bright colors and MTV panache, the 80s were as colorful as peacocks, and many of the drinks showed off their effervesce—B-52s, Sex on Beach, Long Island ice tea. But for a more classy representation of the 1980s, and to recognize the strengthening of economic flow between the U.S. and Mexico during this time, order a tequila gimlet at Peerless, 265 4th St, Ashland.

Maybe it is an attempt to make drinking alcohol healthy? Or, perhaps it was the first stirring of the farm-to-table movement? Or, maybe because political and cultural walls were being torn down? Or, maybe this is just when cocktails started to become post-modern, but the 1990s witnessed the full-fledged use of fruits and berries to bring a zing to old-time favorites. Blondie’s (226 SW. G St., Grant’s Pass) has a wide selection, like the Washington Apple (Crown Royale, apple pucker and cranberry juice) and the Cuantini (Absolut Citron, cilantro, fresh lemon and lime juice).

Maybe because we need some relief—from the 21st century ills (oh, name them, 9/11 terrorism, global warming, spammers)—but simple syrups entered the cocktail world in the past 15 years like a refreshing jump in the pool on a hot summer afternoon. The Haul (121 SW H St, Grants Pass) matches burning alcohol with the cooling effects of their rhubarb and other syrups; a nice combination. Also, check out their hand-crafted sodas. (Oh, and if a refreshing syrup or soda doesn’t seem like your remedy for social ills, they also have plenty of different whiskeys to belt back.)