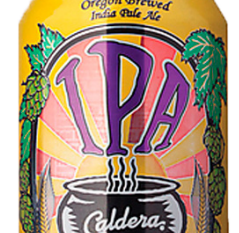 Among the now-abundant “wall of taps” venues, Caldera Brewery enjoys relative seniority—and is a staple. Want to go to the source? Just off I-5 on the south end of Ashland, Caldera Restaurant and Brewery features 40-some brews and a cozy fireplace—perfect for apres-ski—while the downtown Tap House offers a shade fewer, a huge creek-side deck and weekend music schedule.  All are creations of brew-master Adam Benson and crew.

While the sheer number of taps impresses, that all are brewed in-house almost exceeds possibility. Most breweries stop at five or so brews; maybe some explore into a dozen. But 40?

But not all winter beers at Caldera are as wooly as a winter sweater: Clear crisp pilsners and lagers retain traditional beer virtues, plus the wide selection showcases classic British style ales, American and India Pales. The rotating Cask Ale is currently the classic Caldera Amber, served slightly warmer and lower in carbonation, reminiscent of Old World beer halls and tent festivals.

But, with Groundhog Day just around the corner, springtime beers are already on the way: Watch for the just released Mosaic IPA, at 6.5% ABV and 100 IBU, as bright and citrusy as a sun-drenched flush of spring wildflower bloom. And the lineup of crisp, slightly acidic sours expands soon with Berliner Weisse, optionally rounded a bit with a shot of agave, raspberry or passion-fruit syrup.