DRINK LOCAL: The Power of One! Osmo’s Alehouse Delivers Depth Below the Surface 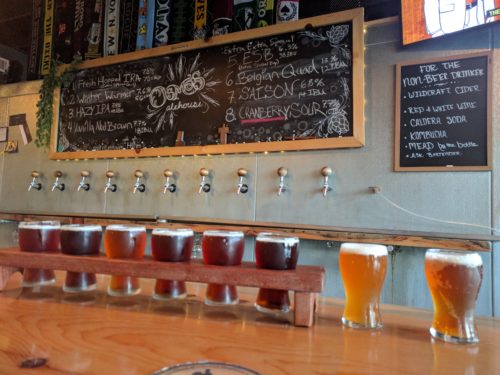 Osmo’s Alehouse is a simple tap house. One-story. One bar. One bartender. Upon first glance, it doesn’t look flashy. And yet, it gets its name from a character from a Finnish poem. Far from simple, right?

When you enter, you’re greeted with some long tables, community style, looked to be built to withstand a major earthquake or my family’s thanksgiving dinners. To your left, the entire brewery sits in the open—brew-kettle, mash tun, hot liquor, and the tanks—as if to say, “This is what we do. Try find some room.” A couch sits near the door, with a Super Nintendo, enough for a child of my generation to turn this place into a post-work wind-down.

To the right is the bar, it consists of a live-edge-wooden top and a series of taps slapped to the side of a keg cooler displaying an impressive eight house-beers on tap. A dozen scarves hang above it, touting various soccer teams, adding some personality to the place. The bartender is a tattooed and smiling woman; her name is Amanda I believe, and she’s exactly what you hope a bartender to be: kind, social, engaging and knowledgeable. She smiles often and answers all of my questions. On the surface, the place seems pretty run-of-the-mill.

But the simplicity of the tap house stops there. Their beers are, if nothing else, bold. They had a series ranging from a Vanilla Nut Brown to a Cranberry Sour. But my favorite part was their flagship ale: the Osmo’s Extra Special Bitter. In a world where every brewery makes a Pale Ale or an IPA their front runner, it acts as nod to the class of the brewery. The beer itself was as an ESB should be: malt, mild bitterness with medium body, and a touch of sweetness. A sessionable ale, if there ever was one.

Another standout is their Belgian Quad. A new style of beer I’d never tried. They aged the beer for seven months—seven months!—in Immortal Spirits whiskey barrels. The beer brags a whopping 13 percent ADV, it has a Belgian beer front—somewhat fruity—with a smooth and sweet whiskey finish.

Their beer list is not for the uninitiated—there is no Coor’s Light or MGD. Instead, it’s a place to expand your horizons. To try something new. To learn a little, while you imbibe. The atmosphere is cozy, and welcoming. It’s a place I could easily see myself sitting with friends, or all alone, with nothing but a sample tray to keep me company. It’s a dichotomy of style: on one hand it’s casual, the type of place you’d be welcome to enter in a wet bathing suit and a pair of flip flops. And on the other, it’s classy: a rich style and range of beers, unapologetic and bold. I don’t know how they juggle those two things, but they do. And expertly, I’d add.

DRINK LOCAL: The Power of One! Osmo’s Alehouse Delivers Depth Below the Surface