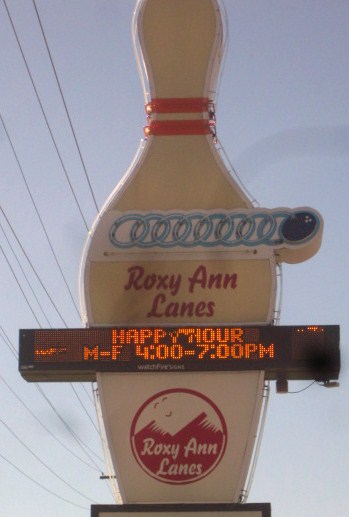 The Drink Local Research Department often meets perfectionists. The brewer perpetually combining malt, hops, and yeast to keep taps flowing and beer geeks buzzing. The winemaker watching grapes on the vine with a scientist’s eye and an artist’s instinct. The distiller, practicing monkish patience, waiting for the critical moment when mere grains transform into a sublime elixir. For a change of pace, the Drink Local team set out to achieve perfection ourselves (not in our prose, though we do aspire to it), but at Happy Hour.

Happy Hour and $1 Games, that is, at Roxy Ann Lanes in South Medford. The lofty goal? A 300 score in bowling, an achievement open to anyone who has the ability to roll a 14 pound ball essentially the same way 12 times in a row. It is an amateur’s opportunity to experience the same Zen-like zone as LeBron James, or Tom Brady, or Clayton Kershaw, other remarkable heavers of balls. On a blazing Thursday afternoon with 32 hours of the work week down, Roxy Ann’s Happy Hour combination—throw in a burbling Fry-o-lator and a fiery grill—beckoned.

Choosing a ball was harder than choosing a beer—Walkabout’s Worker’s Pale Ale seemed appropriate for the traditionally blue-collar sport. The bar has 12 total taps, more Oregon micro-brews and national brands, though no Olympia or Rainier which would seem natural. Take your beer out to your lane–they’ll call you on the P.A. when your order of fries is ready. Lacing up our bowling shoes and savoring a cold swallow of Worker’s completed the Mr. Rogers’ like transition from cubicle-dweller to wizard of the pins.

After that first frame, perfection seemed over-rated. The honor roll near the front door attests to plenty of Roxy Ann regulars rolling 300 games. League night doesn’t start until 6:30, so there’s no hurry and no pressure for irregulars to hope at least for a strike or two. Might as well get a second beer for the second game. At three bucks for the brew, and one buck for the game, the perfect part will be your relaxed frame of mind to end the week.