The name of the study is foreboding: “Sentenced to Debt: The Hidden Costs of Unaffordable Education.” But, released earlier this month, the report perhaps doesn’t bang the alarm bells loudly enough.

Compiled by Oregon Action and Alliance for a Just Society of Southern Oregon and Rogue Community College, the report is essentially survey results of students about their student loans—and, more precisely, accusing underfunding of public education as a primary culprit for the mountainous debt that students pile up during their college careers.

In a press release, Kay Brooks, an Oregon Action board member who recently graduated from RCC, provided a summary about the dilemma that the current financial aid and rising college tuition looks like to many middle and working class students: “A college education is supposed to be a path to economic success and a better future,” she said. “Instead, many students are having to choose between a low-wage, dead end job or taking on debt that will burden them and their families for decades. That’s not a sustainable path forward for Oregon.”

What she is indicating is that the financial calculation about whether to attend college as a means to revving up one’s career and earning power is no longer that simple. In the decades after World War II, the difference in earning power between someone with a college diploma and someone without was world’s apart—and student loans were minor considerations. But, more recently, that decision has not been as obvious, as student loans have become more necessary to fund college tuitions that are soaring faster than cost-of-living indexes. Consider just one insight: Twenty years ago, student tuition was expected to cover less than half of the cost of the state’s universities, but by 2013, that burden on students rose to the expectation that their tuition would cover 73 percent.

How that plays out for individual students is, as the study found, that nearly three-fourths of SOU and RCC students surveyed indicated that they expect to graduate with debt somewhere between $25,000 and $75,000.

The domino effect from these financial concerns is clear: 57 percent of respondents added that they struggle to afford housing, and 46 percent said they are “food insecure.” 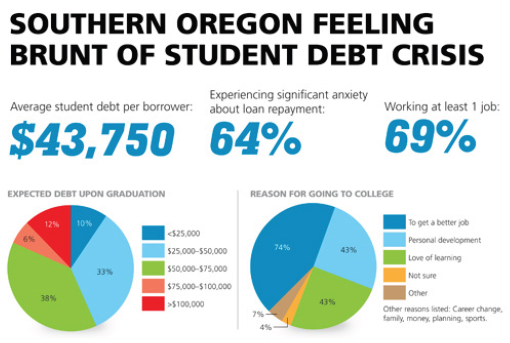 The report comes at the beginning of the annual state legislature session, perhaps the group of people who can do the most to remedy or at least alleviate this epidemic.

Yes, this is part of a national trend, but Oregon is doing worse than most states, and it compounds chronic problems in the secondary education, where Oregon ranks as one of the worst—and routinely, the worst—state for on-time graduation rates. With funding cuts for public higher education the sixth highest in the nation, over the past decade state funding for college students in public institutions has been nearly 40 percent.

There are solutions, TK. During the last session, the state legislature did restore some funding for public institutions, but it needs to be much more aggressive, like considering higher corporate taxes for those very businesses benefitting from an educated work force.

The hole that the state legislature is digging for individual students is deep, but if state funding doesn’t improve—and continues to place the burden on students—it will become WHAT.