Ten years ago, we all cleared our schedules in our Daily Planners, and gathered in front of the tube to catch the new episode of Lost. (Though we were all even more confused the more we watched, am I right?) On another channel, not too far from the addictive draw of people trapped on a haunted island, was RVTV’s SOUP TV (Southern Oregon University Productions), which was showing the (sometimes) more coherent film work of SOU students, sometimes for class and sometimes for fun. That time slot persevered to today (unlike the smoke monster), a new age for the ever-more-accessible world of filmmaking.

“It isn’t lectures,” says Brandon Givens, the Manager of SOU’s Digital Media Center. “It is content produced by the students, created independently of the RVTV staff, SOU or any government entities. Sometimes it’s great, sometimes it’s goofy, and it is usually interesting.” 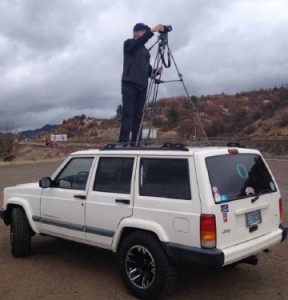 Givens started as the Manager of SOU’s DMC this past July, but he has been working for RVTV in different capacities since 2007, so he has seen television, and the study of it, evolve over the years. And he has definitely observed an upswing in SOUP TV, and beyond.

“One decade ago, there were five to 20 programs per year,” he says. “Now, there are many more. For example, the foundational video class for MDA and Communication major students is a cross-listed class, and there were over 100 students in that class for winter term last year with each of them producing two key pieces in the class.”

Now that is a lot of content. Givens chalks up this boost to the accessibility to video making in recent years, along with its impact on business.

“Students are learning that producing media is becoming foundational in almost any industry,” he says. “We are a digital content world and generation now. It is not a specialized, highly controlled industry anymore.”

But with more people creating, in order to be the best, your work has got to be better.

“If you are going to tell your story about your business or your non-profit or your research or what you ate for lunch today, you have to be competent in telling that story,” Givens says.

Speaking of in-with-the-new, SOUP TV content exists from over a decade ago, and while they plan to keep an archive of past student work, they will no longer be able to show most of it when they (“hopefully”) switch to High Definition in October. So, now is the time to watch, either on cable or online (Channel 15/182 or rvtv.sou.edu), but first, a bit of navigation.

RVTV is separated into four channels: Prime (9/180), Civic (1/181), Grants Pass (183) and Voices (15/180), the Southern Oregon Community Access channel, which is SOUP’s home channel. Voices is RVTV’s General Access channel, which means that any member of the community can submit a program to be shown. (Not featuring any blatant illegal activities, of course.) There are even late slots for shows that are “adult in nature while still being legal,” says Givens.

In addition to a little late night, grown up fun, Voices features a regular cooking show, music shows, church services and other ongoing offerings that even include plots and characters to get attached to. SOUP TV is similar, with their Daytime slot during lunch for appropriate material and a Tuesday night slot for more mature audiences, “whether it be fighting zombies or dirty jokes,” chuckles Givens.