Home»Food»Disappointment Becomes Upgrade: Rogue Coffee Roasters Has Made the Best of Having to Move—And Then Some
Food

Disappointment Becomes Upgrade: Rogue Coffee Roasters Has Made the Best of Having to Move—And Then Some 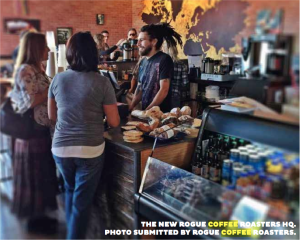 When Rogue Coffee Roasters was informed by their landlords of seven years that they would have to leave their beloved location on G Street in Grants Pass, many were heartbroken. The cozy and inviting space had been quite an improvement from the storage unit/garage that they had previously been roasting in, serving only a handful of clients at the time. The organic coffee roasters who won the Best Coffee in Oregon at the Oregon State Fair in 2013 now occupy the former Expert Tire on 6th and K Streets in Grants Pass, along with a drive thru spot at 9th and F Streets. Though the change was unexpected and painful, the new spaces and possibilities hold promise.

“G Street was a huge loss,” says owner Jeremy Terwilliger. “But the new space is going better than we could have imagined.”

The drive thru on 9th and F opened on the Fourth of July this summer, which Terwilliger says he “had my eye on” for years, yet the opportunity wasn’t there. About opening the drive thru, he adds that it was, “Planned? No. Convenient? Yes.”

The move to open the drive thru was important for the big move coming shortly after.

“Opening a small space was a low volume way of preparing me for opening K Street, a kind of mini lesson,” says Terwilliger.

Not only was the opening of the K Street location a challenge, but the circumstances leading up to the location opening on September 5 proved trying.

“It has never been my intention to close G Street in order to open another facility,” reads the letter posted on Rogue Roasters former space, penned by Terwilliger. “I would never consider this unless forced. In this case, our landlords feel the building is worth more empty than occupied and we are being forced to close.”

Now that the K Street spot is up and running, it would seem that spirits are back up.

“This building was an empty place,” says Terwilliger. “It gave me the opportunity to create was a coffee shop could look like; it was a blank canvas.”

In addition to enlarging their roasting operation and cold brew production, the new space allows for a drive thru and extravagant amenities like—a break room for employees. Speaking of which, Terwilliger attributes the success of the business to his team—and the community.

“The staff keeps everything flowing and they represent the brand; I just guide the ship,” he says. “And with this new space, the community reached out and gave us a giant hug and supported us.”

And Rogue Coffee Roasters is all about community.

“The goals of Rogue Roasters has always been to build community and sell organic coffee,” says Terwilliger. “The coffee is secondary, and that focus has allowed us to grow in this community.”

And while the change train is rolling, why not have more change? Terwilliger says that in about a month, they will add a beer and wine menu to their repertoire, and in about six weeks, a lunch menu, with breakfast to follow.

Disappointment Becomes Upgrade: Rogue Coffee Roasters Has Made the Best of Having to Move—And Then Some