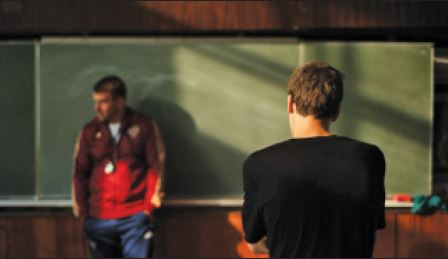 Our actions define us. They shape how the rest of the world perceives us, the possibilities open to us, and our relationships with those around us. The motivations behind our more wayward actions, if not carefully controlled, can drive us to destroy ourselves, and one another. And when these actions are motivated by belief, by a deep-seated faith that one is serving a righteous cause, one can act without thinking, or even worrying about the pain they inflict.

Kirill Serebrennikov’s The Student is an adaptation of Marius von Mayenburg’s play Martyr. The film is a harsh and relentless look into the consequences of fanatical devotion to one’s faith, and the deadlock modern society finds itself in when faced with said consequences. Our protagonist is Venya, a young man who has chosen to devote himself entirely to the scripture of Christ. What follows is a series of instances in which the troubled Venya’s extreme faith and practices clash loudly with the rules and beliefs laid down by his peers, his mother, and his teachers, one of whom in particular serves as a sympathetic antagonist.

The film establishes a feeling of cold, with sharp lighting piercing the darkness and creating an atmosphere of moral ambiguity. Meanwhile, the soundtrack uses abrasive violins to keep the audience from feeling comfortable. After all, when one is comfortable, one is complacent, and often unwilling to question what they are told. A film such as this is designed to generate discomfort, to stir up the thoughts and questions from which we are often quick to shy away.

Belief is a powerful thing, and for many of us it is how we make sense of a universe as vast and ever-expanding as ours. Serebrennikov’s film shows us the terrifying possibilities we become open to when we let faith become fanaticism, and when we allow our beliefs to drive our actions completely. I whole-heartedly recommend The Student to anyone who isn’t afraid of the questions it asks.