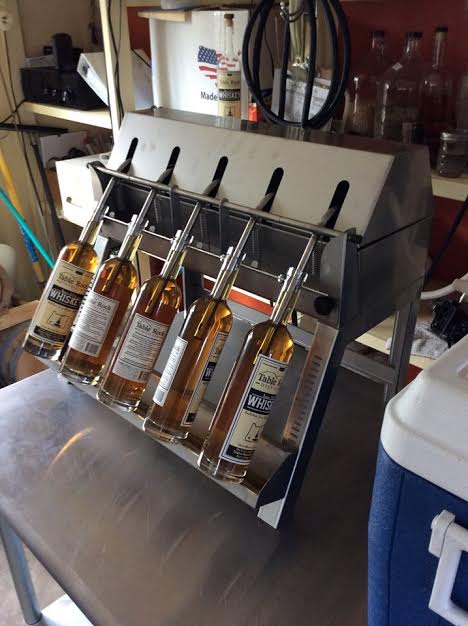 Gary Thompson has a well-used dart board in his distillery. If you have ever played, you know that you have to throw the same three darts at the same spots but that you never quite hit the exact same ones. Making whiskey, you also follow the same steps, repeatedly. Yet, each batch has its own unique characteristics. Even without having had two fingers of Table Rock Distillery’s whiskey, the dart board’s presence across the room from the still’s polished steel column makes utter sense.

“Every time I ferment, something different happens,” Thompson says, sitting in a camp chair inside the 480 square foot converted garage where he performs his alchemy. “I have to figure out what happened… “ Thompson, understably for someone with a mechanical background in commercial HVAC, enjoys that challenge.

Since 2014, he has been perfecting his only product, Rogue Valley Whiskey. He starts with the same malted barley, the same yeast, and the same water from the well at his home in the rolling hills between Eagle Point and Butte Falls. Then, step-by-artisanal step, he guides the liquid from its beer-like “wort” stage to the finished elixir, 14 months later. Even then, when the aging process in charred, American white-oak barrels is complete, creating the final product requires extensive rounds of sampling and blending. Sherry Thompson, Gary’s wife and partner, contributes her palate to the process.

Thompson is not, however, a mad chemist toiling in isolation. He appreciates the support of his fermenting and distilling compatriots in the Rogue Valley. “It’s a great industry,” he says. “Everyone–like Todd Kemp at III Spirits, or Ross Litton at Walkabout Brewing–is super helpful, and fun to work with.” Thompson believes that the collective spirit within the spirit industry is helping to drive it in “a positive direction, especially in the Rogue Valley. The products made by everyone here are all top-notch.”

The Drink Local Research Department will attest to that. Two fingers of Rogue Valley Whiskey soothed ragged nerves after battling late-afternoon traffic along OR 62 to visit Thompson. A second two fingers, and spectators at the dart game might want to stand well out of range.