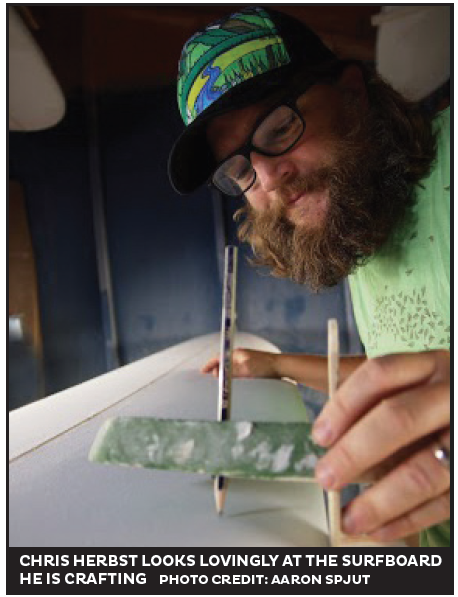 For students who are looking to round out their electives this fall, look no further than the Outdoor Leadership Program’s Surfboard Making class, taught by custom surfboard master Chris Herbst. Through vibrant colors, customization, and the love of the Pacific Northwest, Herbst provides a product that’s an experience.

“I don’t just make them and try to sell them––I make them for a person,” he says. “Everything I do is 100-percent custom. So, if you want one, I do whatever color you want, whatever shape you want, and it’s not like something you’re buying off a rack. It’s like buying a painting.”

A Wisconsin native, Herbst moved to Redondo Beach to embrace the coastal culture. While there, his neighbor, skilled surfboard maker Bruce Grant, taught him the art of surfboard making. Thirteen years later, Herbst has mastered the art of making multiple styles of surfboards, like longboards, fishes, eggs, and paddle boards.

While in California, Herbst taught art, where he often saw his students surfing. “All the kids that I taught were surfers. There was like a real need for it.” When he moved to Oregon he continued the vocation at Medford high schools, teaching sculpture art. “It took me awhile to discover that there wasn’t a semi-surf scene [in Oregon],” he says with a laugh.

There is, however, still an interest in surfing. Herbst explains that he makes at least one or two boards a month, describing it as a “passion thing.” But surfboard making isn’t his primary creative outlet. Herbst runs his own business, called Flow Factory, where he creates custom apparel for businesses, such as hats and t-shirts.

His hat designs “started with just friends, and then it went to everyone in town wanted one.” In the past he hand-painted the designs onto the hats, but with the higher demand and limited time, he now primarily prints his designs on apparel. His designs embody the nature and mountains of the Northwest by representing that through many bright colors.

What Herbst loves about Southern Oregon is the sense of community and overall friendliness. “You can do it all here,” he says. “The people here are cool. When I moved to Ashland, I didn’t know anybody here, and I had, like, great friends within no time. It’s a laid back place.”

When he lived in Southern California, he describes the culture to be much more competitive. Although that was where he learned how to make surfboards, Oregon represents going with the flow and truly experiencing the nature that surrounds those living in it. 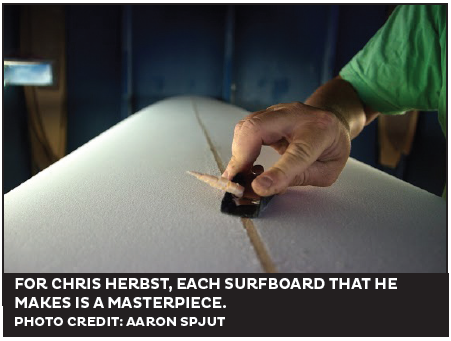 “That’s where Flow Factory comes from,” he says. “It’s about the feel of what you’re doing. It’s not about the aggression. It’s more about being one with nature and not killing nature and shredding it.”

“The waves are more consistent,” he says. “There’s no people in the water. There’s no competition…For me it’s more about the experience of it.”

Herbst believes he lives in the ideal place for surfing, sharing his art with others, and raising his two sons with his wife. Though Flow Factory has only been around for three years, it has a promising future with a one-of-a-kind style Herbst has worked hard on creating and making his own. Herbst’s custom surfboards and apparel can be found on his website: flowfactorynw.com.