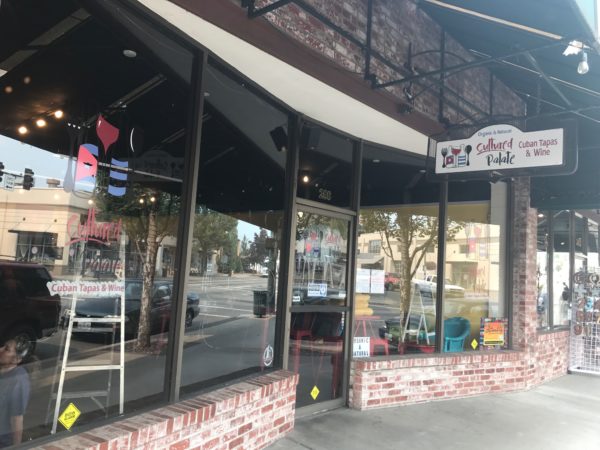 This spring and summer, some kind of restaurant Miracle-Grow sprinkled itself on Grants Pass. The city got a full-service Indian restaurant and just about every block downtown became home to new digs including a pizza joint, an Asian tapas restaurant, a bistro and more.

So, what’s the deal? Is opening a restaurant as easy as shopping for chicken at the store? We reached out to new business owner Angela Padilla to get the scoop on what it’s like to be a new restaurant/bar owner right now in Grants Pass. Padilla opened Cultured Palate with her husband, Jorge, in late July.

The duo has a long history of supplying the Valley with food, from catering to setting up a food booth at the Saturday Market. Their new eatery is located on 6th Street, right next to the Twisted Cork and serves a variety of Cuban-influenced tapas like tostones (fried plantains), Cubano sandwiches and a variety of bowls. The joint is just as much drink as it is food and rumor has it the mojito and Cuban coffee are must tries. It’s important to note that Padilla doesn’t label the business as a restaurant, but as a tapas and wine bar. The recipes the couple use are from Jorge’s family. So reads the menu, “Jorge and Angela first met in June of 1986. It was only a short time before Angela fell deeply in love…with Jorge’s family’s Cuban food!” Of course, the couple did get married, but as she puts it about the food, it’s family recipes. “I’ve always tried to say it’s a ‘non-restaurant’ because restaurants are too stressful,” she says.

Rogue Valley Messenger: Why did you and Jorge decide that now was the right time to open a restaurant?

Angela Padilla: I learned of the possibility of the ideal space we are at now being available and thought/prayed, “Lord, if I did decide to open a Cuban-themed tapas and wine bar I’d want it to be right there.” Less than a month later, I had the lease and the keys. I didn’t have any money, but He worked that detail out, too. It is a prime location in downtown Grants Pass.

RVM: How have the first few weeks been?

AP: Business has been great! Our regular customers and our friends have been very supportive and the community has been very receptive to something new and full of culture.

RVM: Could you tell us a little about the first customer you had and the first night you were open?

AP: Our first customers were husband and wife and loved the food! Can’t get any better than that. Our Grand Opening was Back to the 50’s weekend in Grants Pass, July 28 & 29th. It was a lot of fun. My father in law is an Elvis impersonator and he and Jorge’s mom came up from Tucson. We had a “Cuban Elvis” outside singing and talking to everyone. I even had him seat people a couple of times.

RVM: What is your hope for the Cultured Palate?

AP: My hope is to be successful enough to pay our bills and make, at least, the same amount of money as I did when I worked so hard for other people. I just want a decent income where I, myself, can enjoy what I’m doing, share culture with others and have a place where everyone can just be themselves.

RVM: Do you know when you’ll break even?

AP: Goodness. No clue. Hopefully, before the projected date in the business plan. That would be nice.

RVM: Is there anything else you want to share?

AP: I love Grants Pass. To me it is like a permanent vacation. I feel very blessed to own a business in what is considered to be the “hub” of GP.