Could Millennials Save The Hunting Industry? 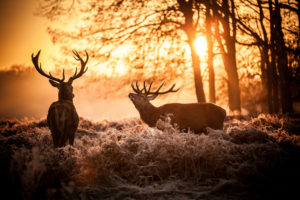 Millennials have been blamed for many changes in American culture — for turning the hotel industry on its head with AirBnb rentals, for dismantling cable television, and for taking the wheels off the concept of traditional taxi cabs. But one unexpected trend has emerged for the nascent generation: They might actually end up saving the American hunting industry.

Over the last three years, the number of vegans in the U.S. has increased by 600%. But even though a lot of Americans have embraced a plant-based diet, some millennials feel that it’s actually a more sustainable move to hunt for their own food. A recent profile in the New York Times followed couple Wade Truong and Rachel Owen — two millennials who didn’t grow up hunting but who have now embraced the practice as a way of life. They have barely purchased any meat over the past year, thanks to their pledge to eat only the protein that they kill.

And while the hipster generation might not be anyone’s first pick to save the hunting movement, many organizations are actually targeting individuals in this age range for good reason. As a hunting recruiter for the Georgia Wildlife Federation told Fox News, “earthy crunchy aligns very well with deer hunting.”

In recent years, hunting-related organizations have struggled to survive. The number of U.S. hunters has been in decline since 1982. That year, 16.7 million people had paid for hunting licenses, but that number fell to 14.4 million by 2010. That number has risen since then, hitting 15.6 million last year. But since only 5% of Americans over the age of 16 partake in hunting, supporters of the sport are pretty desperate to get numbers up.

It’s not just hunters who are selfishly worried about what will happen if participation continues to decline. For one thing, local and national economies are significantly affected by hunting activities. In Alabama, for example, hunting generates a $1.8 billion impact every year. On a national scale, hunting and target shooting generate a staggering $55.4 billion on an annual basis. So when a hunter obtains a license to hunt some of the 100,000 black bears that live in Alaska or the countless whitetail deer that dwell throughout the country, their direct and indirect spending has huge consequences for their state and for the U.S. as a whole.

And while it might seem counterintuitive, hunting is actually important for wildlife conservation. Because many wildlife agencies do not receive much money from the state or from the federal government, these organizations rely on the money contributed by hunters and supporters; in many cases, this funding then goes back into the agencies to promote conservation programs. Any money they do receive from the government is typically determined using the number of hunting licenses sold in a given year. So when the number of licensed hunters decrease, these agencies receive less funding for conservation in general. It’s also important to remember that hunting can serve as an important part of population control. Although the U.S. pest control industry grew by 2.8% in 2018, one of the best methods to control populations of deer and other species is the practice of responsible hunting.

Many millennials are realizing that if they want to help the environment and know exactly where their food is coming from, self-sustainability is really the way to go. Hunting groups like Field to Fork are developing cooking and hunting classes specifically to target young people who want to reduce their consumption of mass-produced foods. They’re now a common sight at many a farmer’s market, promoting slogans like “harvest your own meat,” and “hunters are the original conservationists.” For the most part, their efforts seem to be working; they’ve even managed to convert former vegetarians. The chance to take an active role in obtaining ethically killed and locally sourced meat is appealing to many a millennial — assuming they can get past the idea of shooting a living creature.

As Matt Dunfee, the director of special programs at the Wildlife Management Institute, told Outdoor Life: “Hipsters want to hunt. But they don’t want to hunt the way a rural farm boy from Illinois wants to hunt… They don’t want to dress the same way, they don’t like focusing on antlers, they don’t like taking pictures of their animals… But they want local, sustainable, ecologically conscious meat. And within our efforts, there are few places to realize those values.”

Could Millennials Save The Hunting Industry?