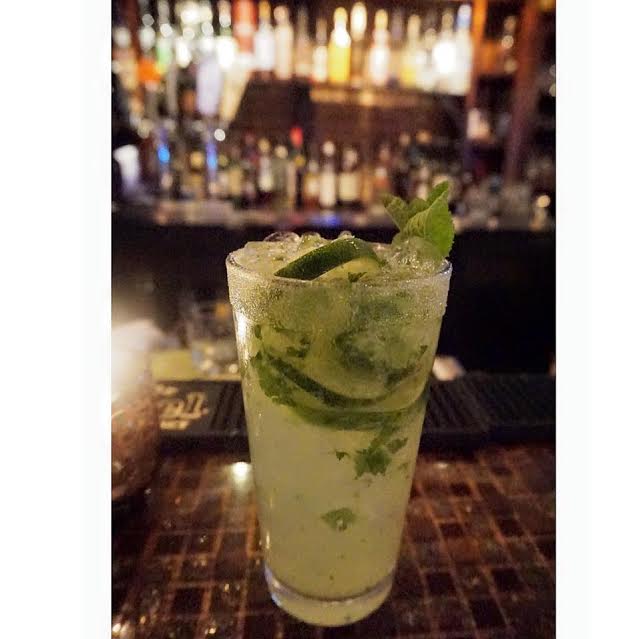 Cocktails are an adult activity. They are not grabbing a brewskie with compadres. They are not sipping chilled Pinot Gris on the deck while the kids run rampant through the backyard. Cocktails are intentional. They smooth away rough edges, calm frayed nerves. A drink can reduce left-brain chatter just enough for expansive thoughts and connection with kindred souls.

In search of the same on an otherwise unremarkable Tuesday afternoon, the Drink Local Research Department settled in at The Bohemian, downtown Grants Pass. Several neon “cocktails” signs beckoned as we cruised 6th and 7th Streets, but The Bohemian’s location—a historic building in the heart of downtown—felt appropriate for drinks. Though still bright with sun at happy hour, the table-top votives and exposed brick walls must transition well after dark into a soothing restaurant hum.

The valley heat suggested refreshing over warming, and the Spicy Basil Cooler and Rosemary Cucumber Gin and Tonic prevailed over the rest of the extensive specialty drinks menu. The former combines an unnamed spiced vodka with lemon, basil, pineapple drinking vinegar, and simple syrup. The latter includes gin, cucumber, rosemary simple syrup, and lime. One worked, and the other did not.

A single cocktail, well-made, is plenty to wind up the day or to commence the evening, whether creative or classic. Two is a definite tipping point, a boundary separating maturity from silliness or stupidity, like the difference between giving your companion your full attention rather than your phone; between taking 15 minutes to sit down and savor your coffee from a china cup rather than slurping it through a plastic lid in the car; between solving problems in society and whining about them on social media. Yes, The Bohemian’s drinks began to work their wonder on the Drink Local Research Department’s conversation.

A similar boundary exists in the creation of a cocktail, the difference between quality and sophomoric. A summer herb—fresh basil—inspired a subtle and sippable cocktail. The summer vegetable—cucumber—soggy and sunken at the bottom of the glass—caused regret at not ordering a straight gin and tonic. If it is the time of day for a drink, The Bohemian will serve you well.