“Our founding president Jerry Work and his wife Sharon went to Appalachia to find out how they expanded their arts economy throughout their region,” says Joyce Abrams, president of the Southern Oregon Guild. “They came back and talked to various organizations about how to really explode the identity of the area as an arts destination, to build the arts economy both locally, and to build tourism.”

One result of the Works’ work was the initial ArtoberFest, launched in 2012 with a grant from the Carpenter Foundation. An expanding list of individual and business supporters has allowed it to thrive.

“The name of ArtoberFest is growing,” says Abrams. “It’s a good name. People everywhere in the region know it.” 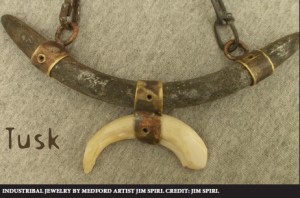 With the call going all over southern Oregon and northern California, the result is an assemblage of artists spanning from Klamath Falls down to Crescent City and most points in between. The competition for booth space results in a high level of creativity, quality, and craft, though size limits of the space keep things sociable.

“It’s a very intimate show,” says Abrams. “The artists are very accessible. You don’t go from booth to booth, you meander through it.”

A peek of the layout revealed a wavy and fluid path through the art. Attendees shouldn’t expect a grid of square canopy booths. An impressive assortment of styles will be on display—acrylic and oil painting, clay, ceramics and other sculptures, fiber and fabric arts, photography, and more. Of particular note are the artists whose media seems to be: (e) all of the above.

Take Jim Spiri. The Medford artist is a photographer, graphic artist, musician, and builder of ‘rustic-industrial’ furniture. But his focus for ArtoberFest is his “Industribal” jewelry fashioned from found natural objects merged with recycled metal.

“A lot of my techniques and materials are primitive and pre-industrial,” says Spiri. “I find a lot in scrap piles and while hiking. There is a lot of heat and hitting things with hammers.”

Spiri has been making the jewelry for about a year, but his designs attract attention. “At my last show a lady remarked to her friend, ‘Wear this into the boardroom and the Power Ties will wet their pants!’” High praise indeed.

Adding to the festive air are selections of soups and sweets, a silent auction, and a variety of live music. Standouts include GR Nelson’s guitar stylings Friday, George & Anwyn Leverett’s ethereal Celtic music Saturday, and Pat Mersman on harpsichord Sunday. Other music highlights include Guppy, Tim & Michelle, and Ross Welcome.

Those making it down shouldn’t limit themselves to just the Rogue Community College building. Other Kerby locales celebrating ArtoberFest include Hampton’s Rock Shop, It’s A Burl, Kerbyville Museum, and Yanase Jewelers. In Cave Junction, the highlight is the popular Valley Girls Quilt Show, now in its eighth year.