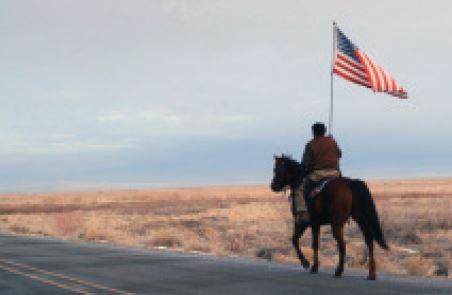 By turns riveting, frustrating, and troubling, No Man’s Land goes deep behind the scenes of the six-gun spectacle that attended the standoff at the Malheur National Wildlife Refuge in the winter of 2016. Luckily for us, filmmaker David Byars’ experience following the patriot movement helped him see past the Wild West Show the occupiers were wholesaling for the world media; instead he focuses his cameras backstage, on a subculture of discontent discovering cutting-edge media tactics. Leaders Ammon and Ryan Bundy and LaVoy Finicum had stepped forward as cowboys out of central casting—ranch boots and Carhartt jackets—while the dozens of self-proclaimed warriors that flocked to them—think camo and semi-automatic weapons—were boastful with threats of modern mayhem, sharper-edged, but no less typecast than those Ammon boys. It was a media opioid. But by grasping for these iconic images the leaders created a narrative—and an impasse with law enforcement—that quickly spun out of their control. The Marlboro Man and Rambo got boxed in. In Byars’ telling, the nearby town of Burns, and especially local sheriff David Ward, emerge as heroes of a better stripe: exasperated by extremism, tolerant, perplexed. And out on the desert horizon, the Feds, and long shadows of past disasters: Ruby Ridge, Waco.

No Man’s Land offers a view as intimate as any we’re likely to see of the Bundys and their Alamo-tinted visions of man against the dark forces of destiny. Thanks to Byars’ remarkable access to the occupation, and editor David Osit’s effective culling from the hurricane of media coverage, we get to ride shotgun in a war of words that takes a turn toward the bloody real. During the standoff, issues that moved these men (and apparently, women, although they are far, far in the background) got lost in the media noise: that is, the role of the federal government in managing public lands, and the leaders’ Mormon faith, which reportedly helped inspire their prophetic stand. Those thorny debates aren’t very present in the film, for better or worse. Rather, Byars told The Hollywood Reporter that he hoped to capture a humanizing portrait of a nation tending toward absolutism: “Living with the characters in No Man’s Land, audiences will walk a mile in the shoes of those whose ideologies they perhaps oppose at their very core, but come away with a deep recognition of common humanity.” Perhaps we will. But it’s quite possible that we never lost sight of our common humanity with these men, even if it was harder to see once their Clint Eastwood poses and bandolier selfies attracted the gaze of an anxious nation. Who do we blame for that—us, them, or that front-facing camera?