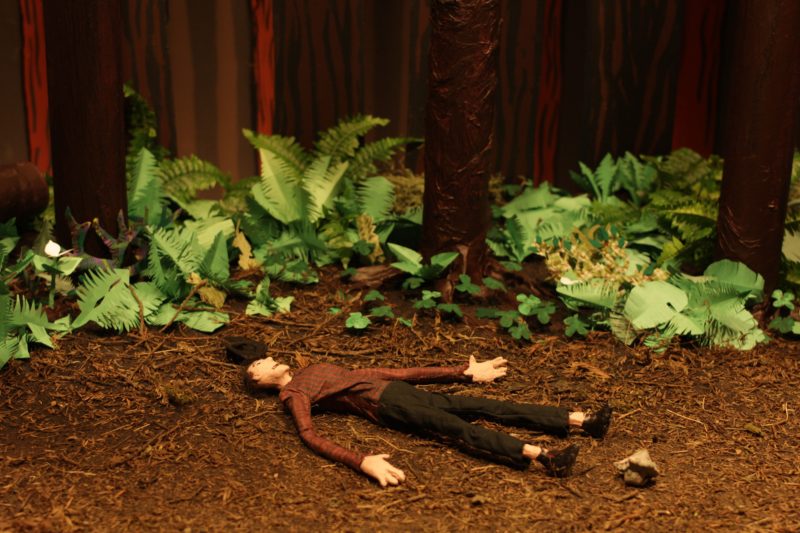 A women’s rugby team fights together on the field, garnering fresh bruises and cuts. An audience listens to the curious story of a man’s death. A woman survives on the run by seeking help from an unlikely stranger.

These stories, all by local filmmakers, are being presented at the Ashland Independent Film Festival.

Ronny Huffstutter is one of those local participants, whose film Refuge follows a woman’s journey to safety.

“I‘ve come a long way from filming comedy skits with my friends in grade school to finally finding some mutually minded people after moving to Southern Oregon,” he says. The Southwest Michigan native always had a deep love for film first rooted in comedy that has now blossomed into other genres. Founding Tunnel 13 Films with his partner Mo Sultan, he says, “We’ve been making films in various genres since we started horror, thrillers, drama, music videos, and hopefully soon back to my roots with some comedy.”

Refuge is about a woman seeking safety, eventually meeting a man who gives her a place to stay. Huffstutter says one of his biggest inspirations for the film was “watching the refuge crisis in Syria and being blown away by the human element involved.” He explains how the media skews the truth to attract better ratings, instilling certain fears into the public.

“My friend and the Director Mohammed Alsultan lives in Saudi Arabia where they’re trying to create a film community. Currently there aren’t even any movie theaters and if anything can create cultural change and connect people, it’s art.”

The Fruit of Jonesy blends multiple types of art into the short film, including live action, claymation, and pictures. Writer and Editor of the film Violet Crabtree brought lighthearted nature and a creative spirit a story containing darker content. She says the inspiration for the story occurred to her when “walking in the woods, and my fear of eating poisonous mushrooms! Also, when I was a lot younger, I invented a new holiday, which is basically Halloween in spring. I wrote The Fruit of Jonesy as a springtime ghost story, to be performed at this ridiculous holiday party we named ‘Beaster.’ ”

Ridiculous might be one word to describe the events in this story, though imaginative is another. An audience sits huddled together listening to a woman representing a skeleton tell the story while sliding pictures across an old projector. Musicians sit around her, one of them sliding a violin bow across a saw, creating a haunting tune.

“It’s a warning to know your mushrooms before you eat them,” Crabtree says. “Also, I hope it makes them laugh! A mother told me her child used to grab mushrooms and put them in her mouth when they walked in the woods, and after seeing The Fruit of Jonesy, she is too scared to do that anymore.”

The short Ruggers is a much different film in the way of creativity. A documentary about Southern Oregon University’s women’s rugby team, director Alison Hoffman represents the strategy and strength that goes into the sport.

“Ruggers actually started as a class assignment where a class partner and I were assigned to make a documentary,” she says. “I had recently joined the women’s rugby team at SOU, and had just had some amazing experiences on the team. Everyone I talked to knew close to nothing about rugby, let alone women’s rugby, so I thought it might be an interesting topic for a documentary. It wasn’t until after gathering interviews that we really knew what kind of story we had.”

The story is as informational as it is inspiring, making the viewer want to get out on the field with the team and not care about mud, grass stains, or a few bruises. Originally from Santa Cruz, Hoffman is a film student at SOU.

She says, “The landscape of Southern Oregon inspires me. Just on my drive to school I pass from mansions to rotting barns, then rivers, forests and city streets. Every time I explore a new local area, I imagine it would make a fantastic filming location.”

Southern Oregon’s landscape has been inspiring storytellers for decades, especially in the wonderful film culture of Ashland. While the festival sees films by many different people from many different places, it’s a treat to watch the work of those so closely involved in the area.