Home»Feature»Chasing the Mushroom: The Perils and Pleasures of Mushroom Picking in Oregon
Feature

Chasing the Mushroom: The Perils and Pleasures of Mushroom Picking in Oregon 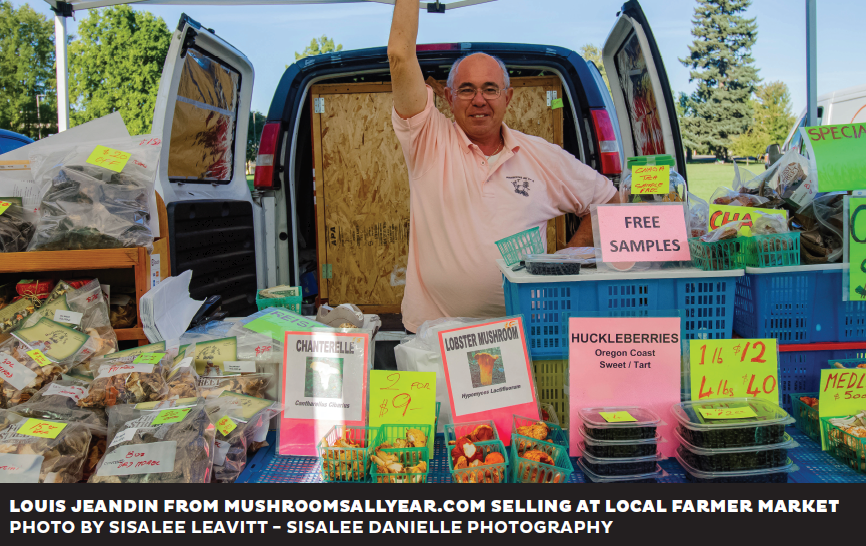 Last August, lightning struck twice—in two different spots just north of Crater Lake. Each strike ignited a small brush fire; both which quickly spread and then joined as one fire, what became known as the National Creek Complex fire. Over three weeks, that fire consumed 21,000 acres and covered space as large and wide as Crater Lake itself.

By this spring, however, the area was beginning to show its first signs of life rebounding, as mushrooms began to push up through the charred region. In turn, crinkly capped mushrooms like the morels began to bring another sign of life—mushroom pickers, who were pilgrimaging into the National Park to find morels, valued by recreational pickers for the thrill of the hunt, and also by commercial pickers who can fetch prices in the hundreds of dollars for a pound.

By the Fourth of July weekend, news about the bounty of morels in the region had moved quickly through the informal networks of mushroom pickers, and the area was becoming particularly popular. News about the mushroom pickers also had spread to law enforcement agents, who often play cat-and-mouse game with illegal pickers—and on July Fourth weekend, National Park Service rangers, working with the Douglas County Sheriff, nabbed more than a dozen illegal pickers and seized a bounty of 200 pounds of morels, a haul worth roughly $10,000.

It is what should be considered a major bust.

Oregon’s geography and climate are prime breeding for hundreds of different types of mushrooms. The rain-soaked forests breed morels and matsutakes in the springtime; in the late summer and fall, there are golden chanterelles; and, winter is famous for elusive truffles.

Somewhat inevitably, this bounty has encouraged both commercial and recreational interests in mushroom picking. But it wasn’t until the late ‘80s when that interest really began to flourish. Until then, the activity was largely a hobby, with just a few small pockets of commercial pickers; mainly Japanese families, where mushrooms have been a much more central feature of diet for generations and where matsutakes (which, in Japanese slang, means penis) are prized delicacies.

Although recent patrols and busts like the ones over July Fourth weekend do happen, they are seemingly rare, and both the commercial and recreational industries remain largely unregulated. By the mid-90s, mushroom picking in Oregon had grown to a loosely organized and cash-heavy trade worth tens of millions. Like monitoring the recently-illegal marijuana industry, patrolling remote stretches of land where the mushroom pickers go simply is not reasonable. Moreover, it is confusing to discern the legitimate picker from illicit activity, as recreational pickers are allowed a gallon worth of picked mushrooms.

And, when the value for morels or matsutakes soar over $100 for a pound, the notion of quick-cash in a largely unregulated market has created a burgeoning industry with the lure and lore of an old-fashion gold rush. (Conservative estimates indicate that the “wild mushroom industry” in Oregon is currently valued around $50 million each year; some of which is sold at farmers’ markets around the state, but a large piece of that market is truly international where fluctuations in Tokyo’s demand can quickly incentivize pickers in Oregon.)

In 1994, there were two widely reported murders connected to pickers in the Cascades and, as recently as ten years ago, a detailed article in the New Yorker shadowed a Laotian picker who had started picking during those wild west days and made a tidy fortune over the decades; the article provided insights to the rambunctious and tense nature of mushroom picking circuit, with pickers carrying side arms and forming gangs. In particular, the article looked at how small hamlets like Chemult and Crescent Lake Junction, which dot the eastern slopes of the Cascades, become boomtowns for a few weeks each year as hundreds, if not thousand, of migrant Laotian and Mexican workers ditch the drudgery and strains of Central California citrus fields for the autonomy and opportunities of mushroom picking.

Also sharing elements of secrecy with the marijuana growing business, both recreational and commercial pickers notoriously remain tight-lipped and secretive about their best sites, often setting up decoys or smudging out their footprints in case anyone tries to trail them. That secrecy also has added to the danger of the industry; just last October an experienced picker was found dead from hypothermia and exposure after losing her way while foraging alone in the Willamette National Forest and, overall, search and rescue missions for lost mushroom pickers statewide have soared to as many as 30 each year.

(Another recommended read is The Mushroom Hunters: On a Trails of an Underground America, released in 2013 by Seattle-based writer Langdon Cook, which traces the path of mushrooms from this wild-west picks to some of New York City’s top restaurants.)

Yet, in spite of the outlaw lore and elements of mushroom picking, the bulk of interest over mushrooms is both civilized and civil. Increasingly, wild mushrooms are available at local farmers’ markets and top shelf restaurants like Scarpetta in downtown Ashland offer seasonal offerings that showcase ingredients like “lobster mushrooms,” a bright red fungi that looks like baked lobster and has a slight buttery taste.

And, a handful of organizations in southern Oregon are working to make certain that mushroom picking remains both lawful and accessible. First started in Medford in 1997, the Northwest Forest Worker Center is a nonprofit that works to organize and protect mushroom pickers, and the Cascade Mycological Society boasts nearly 1000 members, and provides nearly daily opportunities for newcomers to learn about the hobby of wild mushroom picking.

“Mushroom hunting is like an adult Easter egg hunt, out in the woods with a bunch of friends, then you cook your finds up,” explains Chesire Mayrsohn, President for the Cascade Mycological Society. She adds, “I also think we are hard-wired to enjoy foraging. Just look at our bodies forward looking stereoscopic vision, with color perception oriented to rather ripe fruit. Hands out front, just perfect for picking things up and putting them in your basket.”

Although some long-time pickers have bemoaned that the increased popularity has crowded woods, Mayrsohn disagrees. “Anything that gets people out in nature and more in touch with nature is positive. People value and respect the woods more if it has personal value to them, like a place to gather mushrooms.”

To get start mushroom picking, Mayrsohn recommends joining a mycological society, like Cascade Mycological Society or taking a class from an organization like Siskiyou Field Institute “You don’t need to go out with an expert,” she says, “just someone who knows more than you do.”

Chasing the Mushroom: The Perils and Pleasures of Mushroom Picking in Oregon