CD Review and Release Party: Divine Dirt, “From The Underworld” 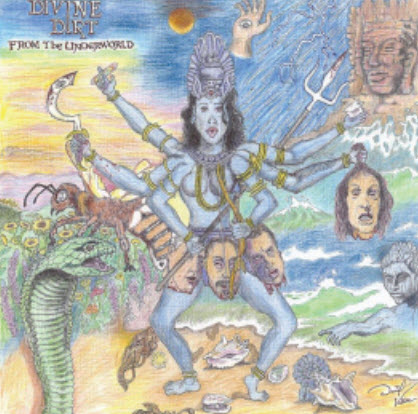 Do you remember the old Memorex ads? Is it live or Memorex? A man sits in an arm chair, his hair blown back by the sheer power of music—and by a song that has been recorded on tape, not the live power Marshall amps thumping out sound waves.

Sure, some studio music can add dimensions and nuances to songs—and still carry the power of a live performance. And sure, sometimes studio music can capture the soul, strength and beauty of a song just as well as well as seeing and hearing the song performed live.

But it simply isn’t the case for everyone. Some bands are simply better—or, certainly more robust—when playing live.

I haven’t seen Divine Dirt play live before. Their CD release party is Saturday, December 15 in Medford—and the CD, “From The Underworld,” has muscle, and snarl, and even booming charm. But I bet dimes to the dollar that Divine Dirt is better in the club than on the stereo. Which isn’t at all to say that their new CD “From the Underworld” doesn’t hammer home its hard rock punk blues, but it simply seems like recording a CD for this band is like trying to capture lightning in a bottle.

The first track is all instrumental, a likeable mash-up between power chords, lots of kick-drum and squishy synth sounds. The second track, a self-titled “Divine Dirt” drops in vocals, and delivers the early-80s California punk house party. Think Surf Punks or, more precisely, Black Flag’s “TV Party”: Cheeky , short vocals with occasional call and response background of a baritone. The CD rides that theme for a few tracks, before the vocals deepen into a growl, the bass lines move towards something more primordial and generally pick up the tempo; not quite death-metal warp speed, but enough to keep a young man heart thumping. (Again, the recorded track carries the spunk of these songs and the band, but live, I imagine these songs would push out big, beefy sound waves large enough to rattle your DNA.)

In fact, the entire CD has a loose musical narrative, moving from its first punk-house-party songs into something close to metal, before evolving into the final track, my favorite, as they add a guest female vocalist, Gitane Demone, to harmonize and balance out the snarling chords, and a shredding guitar curling in and out of the song and help to widen the aural spectrum. It is truly a strong ending to the CD, and I can only imagine that their shows have the same crescendo.

Divine Dirt plays December 15 in Medford at the Pyrate Punx House and this spring heads out for a Midwest tour of Kenosha, Wisc., Peoria, Ill., and Indianapolis. “From The Underworld” is available at Diana’s Records, 343 E Main St, Ashland.

CD Review and Release Party: Divine Dirt, “From The Underworld”