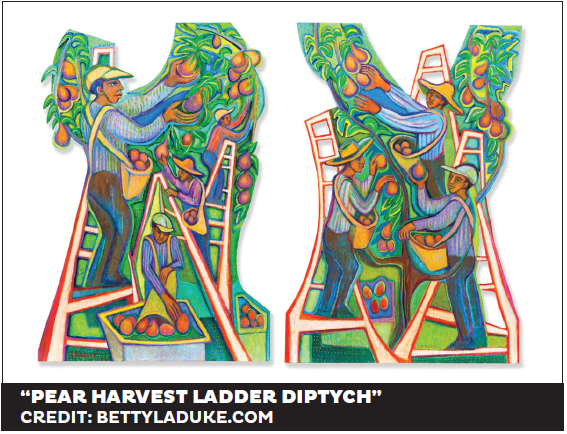 Walking through Betty LaDuke’s workspace, where tall, colorful panels depict men and women picking fruit surrounded by green leaves, is like walking through the orchards themselves, picking ripe pears and breathing in their sweet scent.

“It starts with my sketchbook,” LaDuke says. One of the most important things for her work is to witness what she creates by visiting the orchards and farms. “I’m very keen on what it’s like physically, what it takes to do the work, what it feels like, what it does—how people do the work.”

She later translates what she sees onto four to seven feet wood plywood panels with multiple layers and colors of acrylic paint. “There are various depths to the plywood,” she says. The depths in the plywood produce a depth in her pieces as a whole.

Having grown up in the Bronx, LaDuke attended High School Music and Art.

“You make the support system as you go along by doing the work,” she says matter-of-factly. Throughout her education and into her career, she’s been able to live in Mexico for three and a half years and travel to several different countries, such as Syria and India. She also taught art at SOU for 32 years, though she traveled during this time as well.

Some of her exhibits, she says, are educational. At Heifer International headquarters in Little Rock, Arkansas, are 30 permanent panels of LaDuke’s work. Working for the organization from 2003-2009, she had the opportunity to travel extensively around the globe.

In her paintings, LaDuke is not simply providing a glimpse into workers at an orchard or farm, she’s telling a story about the relationship between the workers and the growers. Her book Bountiful Harvest: From Land to Table, published earlier this year, tells her own story while also the experiences she’s had on local farms throughout the Rogue Valley.

“It was a two-year project in terms of the writing,” she says, “and part of it was just the delight in not only telling my story and how agriculture around the world became a theme for me and then bringing it to the Rogue Valley, but also I was very keen on the growers and their workers.”

LaDuke’s passion for where our food comes from locally, as well as how the workers are treated, has established a beautiful and unique style of art that identifies herself immediately when one sees her work. While she has permanent exhibits in the Medford Airport and at Heifer International, her work is constantly touring across the U.S., educating countless people about agriculture through her vibrant colors and one-of-a-kind representations of farming.