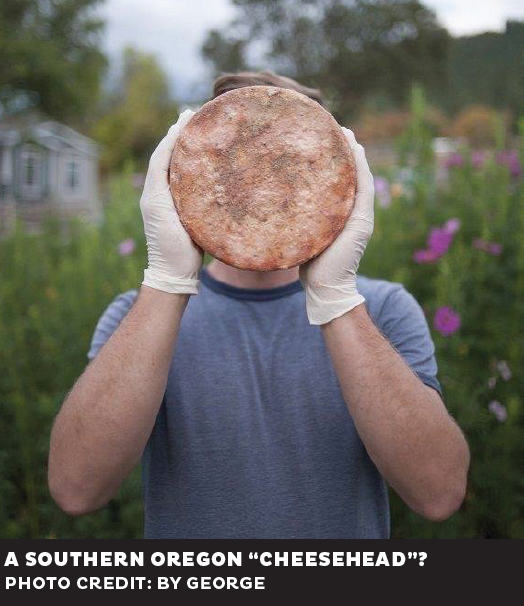 Jonny Steiger takes a philosophical approach in describing why cheese is the superior dairy product.

“Well first, cheese is delicious.” he says, adding, “Milk has a short shelf life. Cheese, on the other hand, is milk’s attempt at immortality.” Steiger, a Wisconsin native, and his husband Tyson Ferhman are the owners—and makers—of By George Cheese. Together, they manage 86 acres of organic ranch, and 15 Jersey cows, in the Little Applegate Valley.

Steiger and Ferhman understand that farming and cheese making are, as Steiger puts it, “part of a greater system.” On their website, the two affirm that—along with roaming an all-organic pasture—the cows of By George are given “no-corn, no-soy, no-GMO grain during milking to help [them] ‘focus.’” As well as, “local, no-spray, no-GMO alfalfa and hay from [the] farm as supplement.”

The idea behind this royal diet is simple enough—the better the food the cows eat, the cleaner and tastier the milk, and eventually cheese, that we eat. Not to mention, the healthy fields (fertilized thanks to the cow’s manure) benefit the produce that By George also grows.

Steiger affirms that happy cows absolutely make for better cheese, “When I eat our Buncom in Bloom I always get a visual of our girls laying in the sun chewing grass.”

As far as creameries go, By George is pretty small—“nano,” in fact. Cheese from By George is small batch, raw aged, and made by hand by Steiger and Ferhman.  Steiger says he enjoys the hours long process involved in making cheese. “It’s very calming and grounding for me,” he adds.

Currently, By George offers six different cheeses. Their Swisskiyou is delicate and nutty—a compliment to any dish. Dutchman’s Peak is a silky textured, Tomme style cheese, good with just about anything. Herby and versatile, their Fromage Blanc is great for cheesecakes. A classic Greek style cheese, their F3ta is creamy and rich. A slow aged beauty, their Gra-na-na-na is (unsurprisingly) a Grana style cheese—to be appreciated. Finally, the out-of this-world Bumcom Brie—named after Oregon’s last standing ghost town, and according to Stieger and Ferhman, a “a delicate pillow of cheese swimming in liquid gold. This cheese will haunt you.” (In a good way).

The two also take interns through Rogue Farm Corp. Interns help with, and learn about, the production of cheese, eggs, produce, and pastured meat. “What good is knowledge if you can’t share it?” asks Steiger. 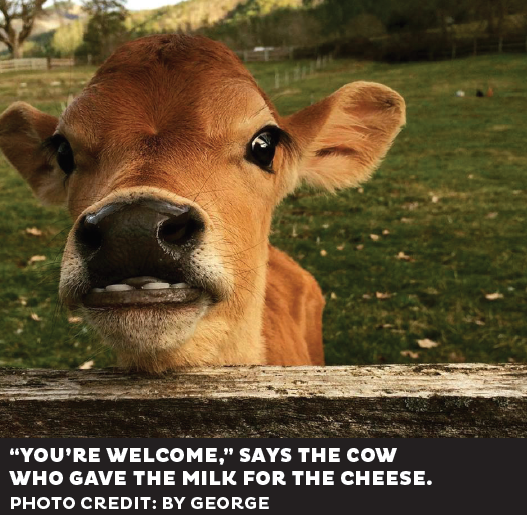 In fact, Steiger and Ferhman found their love for cheese making while Rogue Farm Corp interns themselves. In 2008 they interned on the Siskiyou Crest Goat Dairy farm outside of Jacksonville. After which they returned to Wisconsin, where they farmed vegetables for top restaurants there.

Their time farming in Wisconsin was short lived, though. In 2012 they were offered the opportunity to manage the land they now farm in the Little Applegate. And, just a few months after returning to Oregon, By George’s first Jersey cow, Loretta, was purchased.

Swissikyou, Buncom Brie, Fromage Blanc, and F3ta are just a few of the cleverly named, and exceptionally tasty cheeses By George offers. Steiger and Ferhman used some of the same sentimentality and humor in naming their farm. The year that the couple returned home from their internship, Ferhman’s grandfather passed away. From money he left Ferhman, the two were able to buy the seeds and tools for their first season. “We also liked the idea of having an entire dish at the restaurants we sold to (in Wisconsin) provided ‘By George’,” says Stieger. Adding, “we thought it a fitting tribute.”

By George has started small, and they plan to grow slowly. Their cheese can currently be purchase at several local stores in the Rogue Valley, as well as every Market of Choice in Oregon. Next season, they hope to be milking 20 cows so as to expand their market reach. They also hope to be able to purchase, rather than manage, the land they farm on.