Bring Your Own Flask: Return of the Genre-Benders from Bend 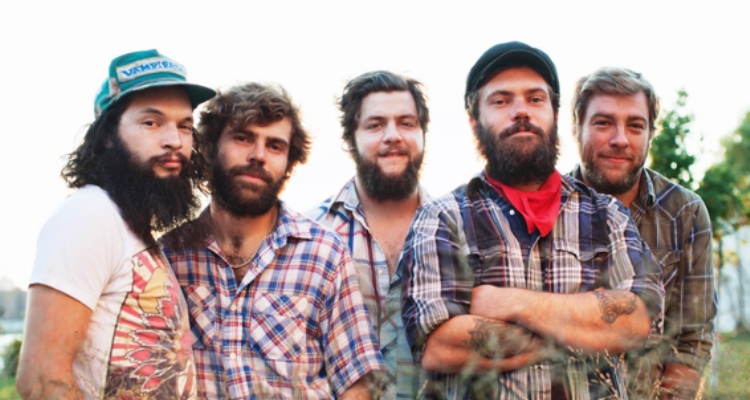 Larry and His Flask have synergy. Considering the fervor and drunkenness that their music exudes, their tight sound in which all members are essential is something to be admired. These hobo-loving Oregonians are well-known for their animated live shows, which will be showcased at Howiee’s on Front in Medford on Sat. April 1st. Despite the date, don’t be fooled, the bearded folk legends will arrive to spread their trademark flippancy.

“I think it’s something like ‘life is short, so grab it by the horns, have a great time and don’t let the bad sh*t in the world drag you down!’,” says drummer and co-founder of LAHF, Jamin Marshall, regarding the band’s message. “And I don’t think it’s shifted much over the years. I think that has always been my message to the fans.”

LAHF takes a punk-rock approach to a soulful bluegrass sound, and it has earned them an audience ranging from reckless young ruffians to your friendly neighborhood hippie. There’s something to be said of a band that sees their job not as work, but as free-wheeling play.

Along with their charming levity, their passion for creation has led them to tour with legendary punks Frank Turner, Dropkick Murphys, and Streetlight Manifesto. The touring lifestyle is notoriously chaotic and difficult to maintain, but it suited the band just as well as their name does.

“In the beginning, it seemed like the best, most fun option we had as a band,” says Marshall. “It helped us to develop our skills as musicians and we could see the world. And as the years went on it felt more like our only option. The touring life was hard but it was certain. We knew what the days and nights would be like. There was food and beer for us and usually a place to sleep. When we got ‘home’ to Bend it was never so certain. We never had time to find solid work. And housing was always an issue.”

These hurdles propelled the group through numerous lineup changes; at one point, harboring as many as eleven members, they now sit at a comfortable quintet. One of the most entertaining aspects of their live show is the multiple duties that all five members cultivate, providing a rich and textured sound that could be likened to a miniature intoxicated orchestra.

“I’d say it took about seven or eight years for us to hone our current ‘Larry and his Flask’ sound,” says Marshall. “However as we progress and move forward as a band I know that our sound will move with us, continuing to evolve and morph as we do personally and as a group. The result is what you hear on the records and what you experience at the show.”

Larry and His Flask w/ The Hollowbodys

Bring Your Own Flask: Return of the Genre-Benders from Bend