Brewing Gold: What Cold Brew Tastes Like in Southern Oregon

Spring and summer are about shedding off winter coats and getting back outdoors. Warmer seasons are also about cold brew coffee.

Brewed at room temperature or cold water for several hours, typically overnight, cold brew ranges from nutty to earthy flavors depending on the roast. In other words, cold brew allows the coffee’s uniqueness enough time to steep and prosper. From coffee stands to coffee shops in the Rogue Valley, here are four coffee businesses masterfully brewing and chilling coffee for anyone’s cold-sipping pleasure.

Case Coffee: With a Mesopotamian Colombian medium roast, Case Coffee is trying a new cold brew that makes it hard to put the iced drink down. The cold brew has a less chocolatey or charcoal taste, but instead exudes citrus, like lemon and orange, and fruity notes in each sip. It’s best consumed without any added sugar or cream, to let the bolder, lighter flavors refresh the tastebuds. Case also offers a flashbrew, which is a Japanese style of cold brew. They brew hot drip coffee over ice, letting it melt and dilute the concentrate, rather than adding water later. The immediate diluting creates what some may consider a waterier coffee, but instead is actually a smoother, milder cool drink.

Pony Espresso: Garnering its beans from Longbottom Coffee and Tea in Hillsboro, Ore., Pony Espresso’s cold brew is a rich Italian roast. The medium to dark coffee carries flavors of earthy dark chocolate. Longbottom Coffee and Tea excels at offering organic and fair trade coffee, as well as flavored coffee. Pony Espresso sells more than simply coffee, but food, micro-brews, and wines as well. However, that doesn’t mean they’ve compromised on the caffeinated portion of their menu. Though it may be considered stronger in flavor, the cold brew is easy to drink and quenches anyone’s thirst for iced coffee. Adding a splash of whole or almond milk may even enrich the deep flavors. 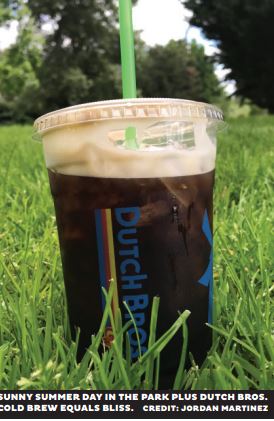 Dutch Bros.: New this spring, Dutch Bros.’s nitro infused cold brew is served either in a can or poured over ice. No matter how you choose to drink it, nitro-infused cold brew produces a creamier texture and chocolatier flavor. Dutch Bros.’s version is less bold and easy to drink, but be prepared for a lot of coffee. A coffee stand well-known for its seemingly unlimited amounts of additional flavors and drink combinations, this cold brew goes down easy without anything added to it. Of course, a pump or two of vanilla or coconut wouldn’t be a bad idea, either.

Limestone Coffee Company: A full city roast of at least three different types of beans each batch, Limestone’s cold brew is always changing. Because there’s a minimum of three beans in their full city roast every time, each cold brew they serve is a little bit different. Its bold flavors are the consistent part about it. From a full-bodied citrus more on the lemon side to a sometimes creamier texture, the cold brew’s inconsistency is what makes it so good. Limestone roasts all of its coffee in house and dedicates every part of itself to providing its customers with the most exceptional coffee in Medford, and their cold brew is no exception.

Brewing Gold: What Cold Brew Tastes Like in Southern Oregon