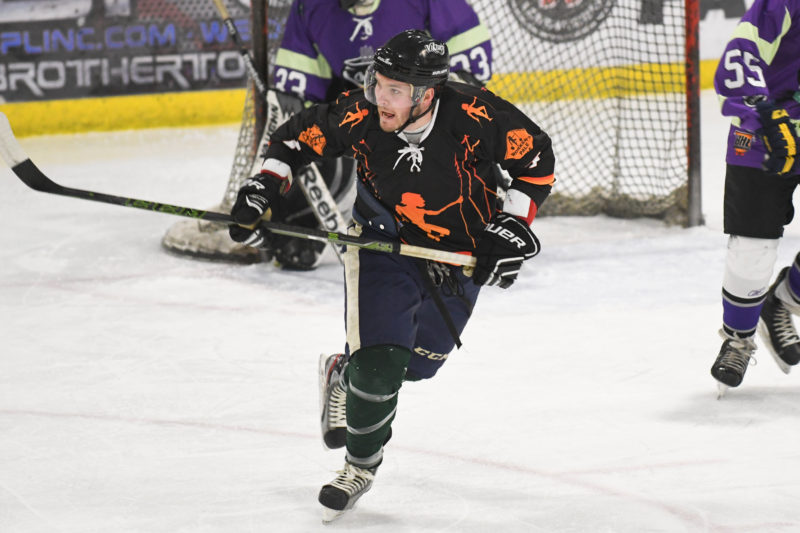 What is it about beer and hockey that makes it such a wonderful match? Perhaps it’s enjoying a cold, refreshing beverage while watching a cold, intense game. Southern Oregon Adult Hockey Association understands the perfect combination through the creation of the Brewery Hockey League, which is in its second year.

President of the SOAHA Richard Hobbins says the league was created “to organize a consistent hockey place for players to come in to play hockey.” Having a strong and growing hockey community in Southern Oregon, it was only natural to include breweries into the sport. “There were small breweries starting to pop up,” says Hobbins, “[and we wanted to] see if we could get them to jump in and help out move hockey forward. We also want to help the community. It’s starting to grow and show pieces we’re wanting to see.”

One of those pieces are attracting quality players to each team to provide a real competitiveness any hockey fan knows and loves. “Probably the coolest thing is the camaraderie.” Hobbins (a Wisconsin native) says it’s a type he’s never seen in any other state. With most other leagues having grudges, he says, “You won’t see the hostility, which is really unique to the Rogue Valley. That camaraderie we have is really special, and it makes new players want to stay.”

“We were approached by the coordinator and asked if we might be interested,” Founder and CEO of Opposition Brewing Co. Nick Ellis says about its simple involvement in the league. “We thought it sounded fun so we agreed to participate!” Jim Mills from Caldera says the relationship between team and brewery is still pretty new. “The league visits each brewery a couple times throughout the season to just socialize and enjoy a couple pints,” says Ellis. “They’re great folks and we’re happy to support them.”

“The hockey league reminded me of a brewing company, all of those guys are doing it just for fun. We’re doing it because it’s a fun industry,” says General Manager of Walkabout Brewing Company Cameron Litton. “I think hockey and beer is a good combo.”

“The support from the brewers has even been better,” says Hobbins. “I appreciate how they didn’t even question their support. It’s really nice to see. It’s easy to go to them [for another season.]” Next year he hopes to see six teams in the league. “There’s a joke around the locker room about it should be beer and bud, [because of the marijuana industry.]”

He says lately there has been an inundation of players to the Rogue Valley, especially goalies. “We have close to 13 goalies in our valley.” He says the “influx of a better level of players has been phenomenal. It’s raised the hockey game quite a bit.”

As long as beer, hockey, and the love for both grows in Southern Oregon, the Brewery Hockey League may grow into a truly competitive, much larger adult hockey league. The next two games will be Sunday, January 23 at the RRRink in Medford, where patrons can see all four teams play in one evening beginning at 5:30 pm.