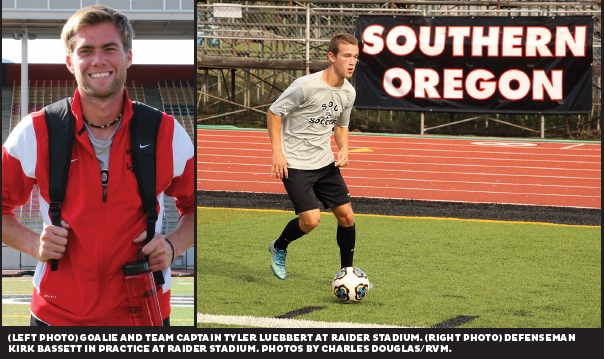 In spite of gaining fans and players for decades in America, soccer is still, somehow, not “America’s pastime.” But that may be changing.

National monthly polling by Luker On Trends has tracked the surging popularity of soccer; according to their data, pro soccer has become the second favorite sport of the 12-24-year-old set—and Oregon is certainly no exception, with the phenomenal rise of the Portland Timbers MLS team—the one that sells out every home game ever played (RCTID)—and no MLB and NFL franchise to compete.

And, now small town universities in Oregon are catching up to this trend, with Eastern Oregon and Southern Oregon both adding men’s soccer teams this year.

“I think it was long overdue and I think people noticed that we have every major sport but soccer,” said SOUs new head coach Biniam Afenegus. “Soccer is popular enough to have at every university.”

Hailing originally from Eritrea in East Africa, Biniam grew up in Spokane, winning four state titles there before going on to play for Concordia College and coach at Clark College in Vancouver, Washington, where he was twice named Northwest Athletic Conference Coach of the Year. While the decision to form the SOU program and hire him was made with little time to spare to piece the new team together, Biniam was attracted to the winning tradition of the Raiders.

“Obviously for me it was an opportunity to start your own program from scratch, it doesn’t happen often,” he said. “I knew I would be successful because of the foundation that’s here, from facilities to all the other forms of support.”

This expectation of success appears to be held up by their gameplay this far. The Raiders are 9-4 as of press time, including an even record in Cascade Conference play—and this is from a team with 21 freshmen (including three hailing from Medford) and zero seniors.

“We’ve done alright I would say,” said assistant coach Omar Anderson. “Growth individually [for each player] has been the biggest challenge.”

The team’s relative youth is both a hurdle and a motivating factor, according to inaugural team captain Tyler Lubbert, who played an all-star role for Afenegus at Clark before following him to SOU.

“We’ve had a lot to prove,” Lubbert stated. “I don’t think the league was expecting us to come out and perform as we have; our teammates have really been showing their best.”

In his first nine games, Lubbert as goalie has held opponents to 1.74 average goals against with 30 saves. He credits his father’s mentoring, along with his time with Afenegus, as shaping his love for the sport.

“Knowing [Afenegus] from the standpoint of when I was a freshman has really helped establish the groundwork for where this program his headed,” Lubbert said. “Biniam really has a keen eye for character and that has a big effect on the guys that head for SOU.”

In addition to recruiting experienced players, the perennial challenge of fundraising for a scholar-athlete program is also a growing pain—men’s soccer is permitted 12 scholarships under NAIA rules, but are nowhere near that level of funding in their first season.

The Raiders will face Carroll College and University of Great Falls for the first time at home games held on Friday, October 23 and Saturday, October 24; both matches start at 5 pm.