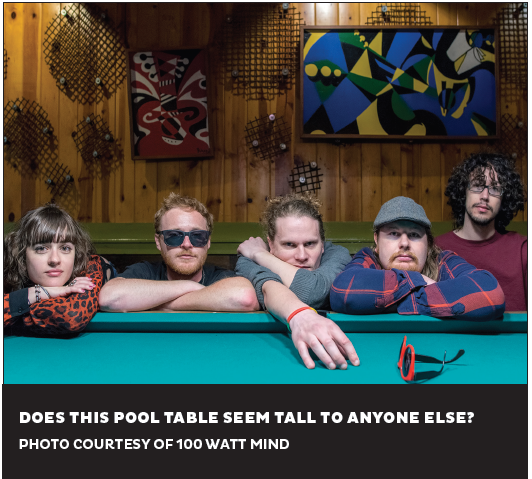 Heisenberg’s uncertainty principle states that observation of a particle inherently changes its behavior. Southern Oregon band 100 Watt Mind’s principle of rock and roll is pretty much the same.

“When you know you’re going to record something, you don’t get the same result,” says guitar player Skyler Squilio. “There’s too much pressure to get it just right, not to experiment.”

But when they’re on stage, being watched, that all changes. The band cuts loose and lets the improv fly, which is why the band feels that their live shows are a wholly different experience than their two albums, but still one their fans ought to be able to access just as easily.

To remedy the situation, they’re releasing a new recording on Saturday, July 9 at Brickroom, Live at Apple Jam, which features an especially epic set from the band from the festival’s mainstage in 2015.

“There’s some shows where you only have a half hour or 45 minutes,” says Squilio. “With an hour and a half there’s more room to experiment, and Apple Jam is always an especially good place to do that.”

100 Watt Mind hadn’t planned the performance as a live album, but heard a mix of it later, and thought it was good enough to release.

“It’s not really a bootleg,” says Squilio. “But we do want to be clear it’s a live recording not our official third album.”

That album, he says, is still in the works, as the band endlessly tinkers with the sound, trying to capture the feel of their live sets. It was something they also shot for on their sophomore release, Creatures,but more through minimalist production rather than sprawling, freeform composition.

Until the band gets it right for the third disc, they may offer up some more of the live recordings for their superfans.

“We might do another in six months or so,” he says.

It’s a way to give fans that extra live dimension, but also the warm glow of nostalgia for listeners.

“Quite a few of the people that will get this recording were probably at the show,” he says.

And speaking of people at the show; the first 100 through the door for 100 Watt Mind’s Live at Apple Jam release party at Brickroom will get the album for free.