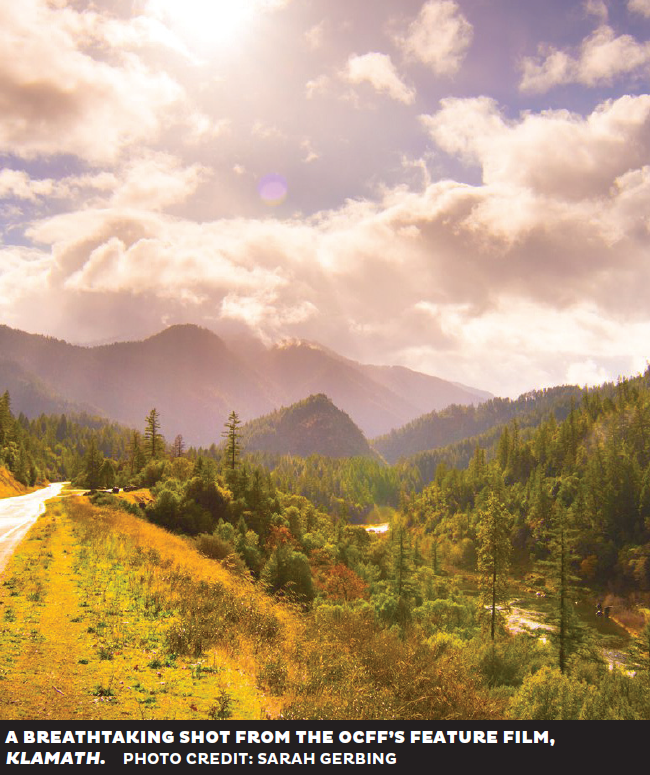 Lately, there has been a rising tide of film festivals in the region—and, in its fourth year, the Oregon Coast Film Festival is adding to that cinematic wave. (C’mon, two puns, one sentence!) With documentaries about fishermen, coastal birds and marine life, the festival is a unique and beautiful tribute to what life looks like on our Pacific Ocean beaches.

Taking place in Bandon for the past three years, this year’s festival has moved to the recently restored Egyptian Theatre in Coos Bay. Dave Wilhite, organizer of the film festival, is excited for the new location this year, because it’s a “larger venue and updated.”

“One of the benefits of going up into Coos Bay is that the rebuilding of the Egyptian has kind of created a film culture within that renovation project,” he adds. “This one at the Egyptian is going to be different because they have [a] 4K projection system.”

“4K” consists of a high resolution that is 4,000 pixels horizontal and 2,000 pixels vertical, displaying film at a much higher, and more detailed, visual quality. His excitement for the projection system comes from being able to do every film justice.

Wilhite has not only embraced the advancements in technology, like using smartphones for film footage, but he welcomes it. He also welcomes films from anyone willing to participate in the festival, especially students. He hopes each festival will “stimulate a filmmaking environment.”

“I’ve always been interested in storytelling, listening to stories being told,” he expresses. “When I moved up here and saw the landscape and the whole coastal experience, I knew there were stories embedded in the landscape.”

The filmmaking culture on the coast, he explains, is community versus industry. A genuine interest in the coastal culture, blended with filmmaking, has created a unique community.

“My vision is to stimulate the interest within the community to tell their stories,” he says. “I want people to tell their stories through film [and to] provide a way for students to be filmmakers, to go and become digital artists. There’s always the theme of Oregon and the Oregon Coast. We try to highlight the landscape and the culture and the unique environment that is the Oregon Coast.”

A few of the films that will be shown at the festival are documentaries about the fishing and marine-life culture in the area. One of the films, titled Birds of Oregon, consists of following various types of birds along the coast as if the viewer is peaking in on their everyday routine. Videographer Briton T. Ogden captures marbled murrelets leaving their homes on the side of a cliff to catch small fish. The film focuses on other birds feeding and exploring the dark waters and sandy shore.

Oregon’s Ocean Legacy: Red Fish Rocks is a documentary about the importance of redfish to Port Orford’s marine ecosystem. Created by Delphi Cinema and directed by Phil Schlieder, the film documents the lifestyle of redfish by going to the experts. The film also highlights the importance of fishing in Port Orford and how it affects the community, especially noting that studying the ecosystem of this area requires several decades of research. Documenting fisherman pulling up large crates filled with crabs and underwater shots of redfish foraging the rocky bottom of the ocean, the viewer feels like a part of the community and the ecosystem.

Also produced by Delphi Cinema and directed by Phil Schlieder, Cascade Head Marine Reserve documents the second largest marine reserve in Oregon. While estuaries and their ecosystems are explained, beautiful shots of the Oregon coast landscape, full of blues, greens, and various shades of brown, are shown through aerial shots. The film informs just as much as it invites the viewer to immerse oneself into the chilling waters and along the mossy paths that make up the Oregon coast.

See the full schedule at oregoncoastfilmfestival.org.