Home»Sound»Music News»Bojangle This Ya F@#$: Frank and Deans to Punk Up the Rat Pack at Johnny B’s
Music News/Sound

Bojangle This Ya F@#$: Frank and Deans to Punk Up the Rat Pack at Johnny B’s 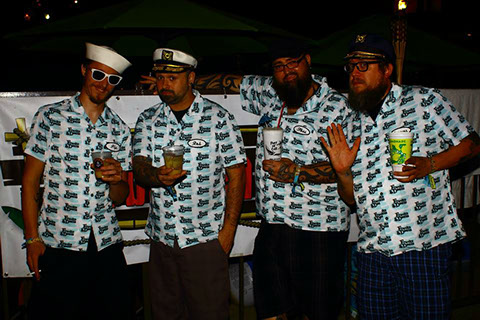 The collection of jazz and lounge standards that make up the Great American Songbook are buried deep in our collective memory. Yet for all the objective greatness of tunes like such as “The Way You Look Tonight” or “That’s Amore,” the passing of time threatens that they may be forgotten. And there’s definitely some punks out there cheering their demise.

But a hero has arisen to heal that divide, preserving the classics, and making ‘em loud enough to keep the kids from rolling their eyes in boredom: Las Vegas based rat pack tribute, Franks and Deans.

Frank and Deans bills themselves as the world’s first rock n’ roll band paying tribute to crooning greats like Dean Martin, Sammy Davis Jr., Louis Prima, Bobby Darin, and two generations of Sinatras. Repping such culturally cherished material is of course a heavy burden to shoulder, and the members of the band don’t take this responsibility lightly.

“We’re trying to bring back songs that have been lost and forgotten,” says guitarist and vocalist Jordan Hoss.

This isn’t just a novel project for these boys either. Hoss clued me into their choirboy origins as youngsters, often singing the same songs that they now sing—but with a bit more worldly experience (and tattoos).

But they aren’t just playing the hits. They’re playing ‘em fast, loud and snotty; punker than punk. So what exactly is the final product of the synthesization of this so-called Rat Pack music and punk-rock?

The band members take care to retain the original melody of the song they choose to work with. Hoss says crafting the musical accompaniment to the melody is the challenge,  as it requires making it both true to punk rock and also allowing space for the melodic complexity of the old songs to fit snugly with three-chord bangers. You know you’re listening to real lovers of the genre when the band opens up Bobby Darin’s classic “Dream Lover” with an off-the-cuff excerpt of NOFX’s “The Brews”. Very strange combination indeed.

Don’t think the punk tag means sloppy execution however. Frank and Deans have chops aplenty when it comes to vocal and musical arrangement. The harmonies that open “That’s Amore” from their debut album How Did You All Get In My Room?  are downright gothic.

To bring a little extra swank to the show, Frank and Deans will be traveling with one of their dancers from the Double Down Saloon in Vegas where they host monthly variety shows called Frank and Deans Weenie Roasts. This is just one way to experience Las Vegas for a night here in the Rogue Valley.

“Everyone needs to experience Vegas at least once,” Hoss says.

Bojangle This Ya F@#$: Frank and Deans to Punk Up the Rat Pack at Johnny B’s