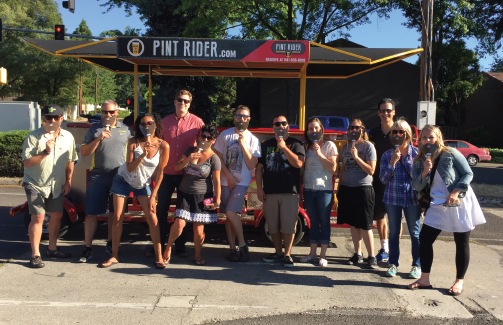 With four wheels, 15 bike seats, bright yellow and red paint, and bold signage, Medford’s new Pint Rider is certainly a spectacle, looking something like an open-air caboose filled to the brim with a jocular spin class shuttling from one bar to the next. Familiar in brewery cities like Bend and Portland, the idea—and the contraption—is new to the Rogue Valley region.

On a recent warm Thursday evening, a group of sixteen boarded the multi-person bike at Quality Market, arousing the curiosity of neighborhood on-lookers. As the Pint Rider rolled slowly by, one couple waved emphatically from their front porch, amused by the scene—another emerged from their living room just to point and stare. Reactions from drivers ranged from photo taking, to honking and engine revving. And the riders on last Thursday’s Pint Rider welcomed the attention like moths on their way to a beer-filled flame.

Before boarding, Freeway, the designated driver of the multi-person bike (and yes, that is his real name) makes some safety announcements. Freeway is tall and broad shouldered, with a buzzed hair cut and big, genuine smile. Last Thursday he was wearing a simple grey T-shirt, with the Pint Rider logo printed on the front, and the kind of big gold sunglasses you’d expect an Elvis Presley impersonator to wear.

He begins with, “The rules are simple. Don’t jump off, yell ‘stop’ if someone falls off.” He then re-affirms the group that hills are few, and the biking part is fairly easy, but then adds: “I’ll encourage you the best I can—but mostly, I’ll be laughing at you.”

Onto the questions: “Is there a bathroom on board,” asks one rider, and  another, “can you stand on the bar thing in the middle.” Freeway answers: no, and no.

The first stop on the ride is The Rogue Growler, a taproom with over 50 beer, wine, and cider offerings. After a couple drinks—discounted for Pint Riders—on the airy back patio, an inevitable and practical question arises. That is; what happens if you get too drunk to bike? According to the ride’s organizer, Kathleen Holtschneider, there are a couple fail-safes. Because of the small motor on board, operated by Freeway, individual pedaling power doesn’t count for much. So drunk and pedaling, or too drunk and not, Holtschneider laughingly asserts, “Nobody else on the bike knows!”

It’s true, on the big bike there is almost no resistance felt while pedaling. In fact, one rider proclaimed, “It’s harder to not pedal!” as the pedals are propelled along. And, a little while later, another rider lost a shoe to the quick moving pedals (retrieved, to the annoyance of the line of cars following). A couple coolers of water are kept on board, which is the only beverage permissible while biking. (This is a bike taken to breweries, not to be confused with a brewery on a bike.) But, while beer isn’t allowed, being loud is. In fact, it’s encouraged. “Just no profanities,” Freeway scolds.

The next short pedal downtown—during which one rider became convinced that the car full of teenagers following the bike was starting a “snapchat battle”—ended at Bricktowne Brewing Company. Bricktowne has a smaller tap selection than The Rogue Growler, but brews locally. And, the tavern-esque interior with large wooden tables sets a good scene for camaraderie (or rowdiness, depending on the group). They also have a full food menu, a happy sight for some well-saturated pint riders.

The sight of the big bike is also a welcome one for breweries. Not only do their bars instantly fill up, the Pint Rider’s excitement is infectious. Pint Rider groups can brewery hop downtown, or stay at one spot, as long as they are back to the bike at the designated time. And, many breweries in Medford offer discounts—a good incentive for exploration.

“I love the fact that things are being done to increase Medford’s activity,” Holtschneider said, in reference to the Pint Rider. She added, “The Pint Rider takes common passions of the folks in Southern Oregon; the outdoors and craft beer, and combines them into an collaborative activity that drives ‘buzz’ and camaraderie among friends, co-workers and community members to support local businesses by having fun.”

For two and a half hours, the Pint Rider can be rented for $300. Holtschneider said she was convinced of the fun of biking to beer when she rented the rider for her bachelorette party. “I felt like a little kid again,” she said. The Pint Rider can be rented for shorter rides, as well, for a little less money. And, for the designated driver Freeway, tips are always encouraged.