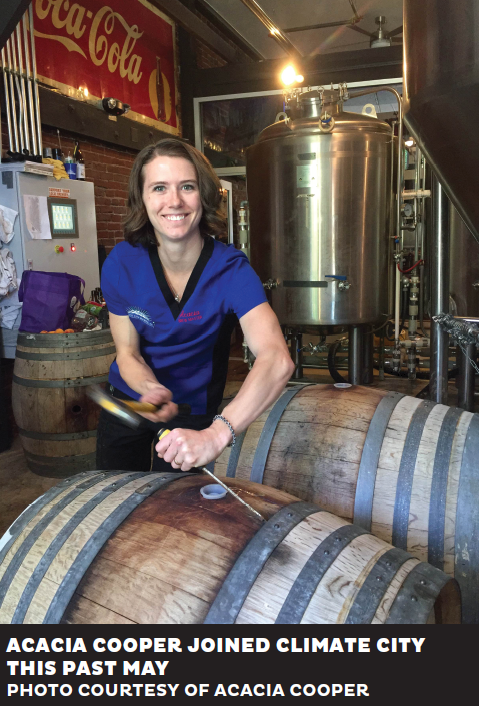 From Anderson Valley Brewing Company to Standing Stone Brewing Company, Acacia Cooper (pronounced Uh-KAY-shuh), 28, has an impressive rap sheet. Originally from Bend, Cooper joined Climate City Brewing in late May as their new brewmaster, taking the spot of Brandon Crews who left for Wild River Brewing and Pizza Co. The Messenger caught up with Cooper to chat about her first few months on the job and what she has in store for the future.

Rogue Valley Messenger: How did you end up at Climate City? Were there other places you interviewed?

Acacia Cooper: I went to SOU for college, so I lived in Ashland and fell in love with the Rogue Valley. The whole reason I’m here now was that our lease was up in California. It was really hard to find a place to live and we’d always intended to move back to Southern Oregon. It was a kick start to “OK we’re moving.” And so I just decided to move to Grants Pass, regardless of if I had a job. Then two weeks into being here a friend said “Hey, I know of a position opening up. I think you should apply for it.” I gave the owners here a call and it went from there.

RVM: How have the first few months been?

AC: Hectic and exciting and a little bit nerve-racking, but it’s been fun. There’s a huge learning curve, but everybody has been really supportive.

RVM: Were there recipes for you when you arrived or did you start making it your own when you got here?

AC: There are four original recipes that we have label approval for. I’m keeping those ones around but modifying them—adding my own spin on them. Like the Nookie IPA, I increased the alcohol content as well as the hops to make it a more robust IPA. The owners here don’t micromanage me; they give me tons and tons of freedom.

RVM: Do you have anything special planned for fall or the holidays?

AC: For the fall I have a doppelbock (available now). Then there’ll be an imperial IPA and a coffee stout as well. The imperial IPA should be out in November and the coffee stout in mid-December, so one for every month.

RVM: Are you working with any techniques right now?

AC: I’m just starting a barrel souring program. I’m getting a ton of requests to do that and it’s taken me awhile to figure out how I’m going to do it here because I have to remove the barrels from the brewery because they’re wild and they’ve got bacteria. If that gets into any of my other tanks everything will be sour and it will be really hard to undo that.

RVM: Are there any ingredients you want to work with?

RVM: What breweries are you inspired by?

RVM: What do you do when you’re not working?

AC: I have a veggie garden. Hiking. I like to go hunting.

RVM: What’s in your personal fridge?

RVM: You have any food in that fridge of yours?

AC: I have hummus, shit, I don’t eat very much. I usually have some Greek yogurt, some fermented vegetables, homemade kefir, anything fermentation-based really.