I’ve always been an above average student.  A solid B- was my general GPA from High School through College. This fact has only been exaggerated now that I’m above the legal drinking limit and can walk to a bar at any time of the day and order a beer. I recently took a creative writing class at RCC for fun. Our teacher, often told us to go out and “Watch the world” to “Write what we see” to “Maybe don’t write about a science fiction gunslinger fighting space aliens from the Garblax Galaxy.” I think he wanted more stories centered in reality. He was apt to throw quotes out from authors like Ernest Hemmingway, “Write Drunk!  But edit sober.” He’d tell us that some of the best stories are right in front of us, not on some distant planet. 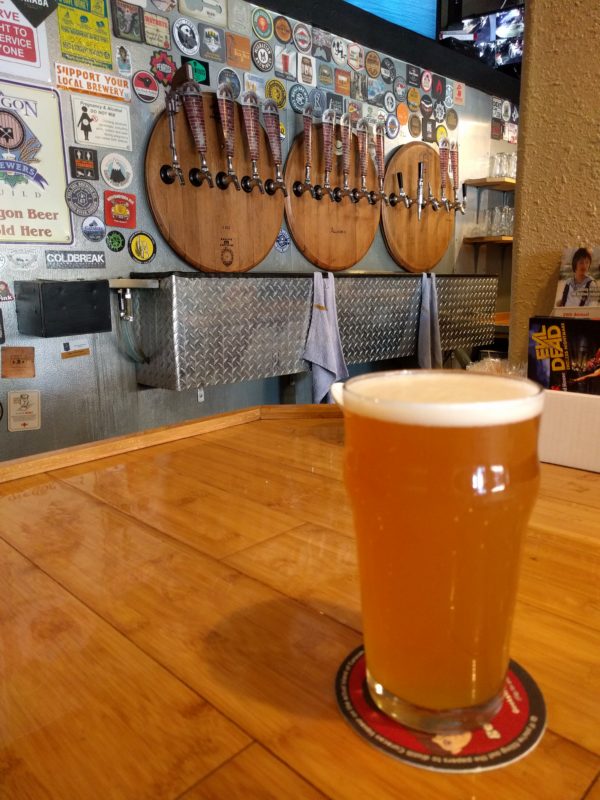 One particular day he sent out to the streets of Medford, to find inspiration. Most students walked to the nearby bench, others down the road, across the bridge and into the park. I, however, walked to a bar. Some things never change.

The bar I chose was BricktownE Brewing, which just so happened to be two blocks from the front door of the school. Location, location.

I bellied up to the bar and found it occupied with half a dozen other people and I got the sensation that this was a watering hole for many by how casual the bartender was with all his patrons. They do a happy hour from 3-6pm, Monday through Saturday. They’ve got TV’s for games, and plenty of seating if you’re party isn’t larger than six. They even give a 10 percent discount for anyone that rides their bike there.

First beer I chose was their Applegate Pale. A classic northwest pale that had a mild hop flavor to it.  Its malty body gave it a nice balance, it was on the verge of being sweet, but not quite. Very refreshing, a great starter. Their Uggly Boots Stout was a milder stout that had seasonal flavors to it.  Cinammon and cloves, with some chocolate. Not creamy, more on the dry side. Their Blue Collar Cream is a great beer for those looking to ease into the craft beer seen; an approachable body with some flavor but not overpowering.

They have two more stouts, one an oatmeal, the other a coffee imperial. Their Ore-Gunslinger Double IPA is their flagship, followed closed behind by the Hop Jaw American IPA. There were about a dozen others, but with my BAC in mind, I couldn’t imbibe in too much more lest I return to class by pinballing against the walls.

I felt particularly inspired and took some notes on the people around me then headed back to class, feeling accomplished. I’d never been able to turn drinking beer into a class activity. Perhaps that was why I never tried hard in school. My teachers just didn’t know how to connect with me: beer.