Home»Sound»Music News»Backwoods Beat: Oso Negro and the Art of Hip Hop Off the Grid
Music News/Sound 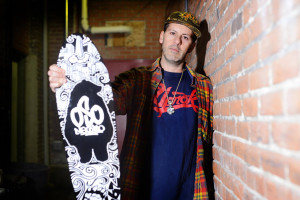 Oso Negro is one of the hardest working men in hip hop. And not just because he drops new albums, collaborations and tours at a furious pace. Based out of Ontario, Oregon, right on the border with Idaho, he does it all with the closest local music scene more than an hour’s drive over the border.

Negro, who regularly tours off the grid, will be coming through Southern Oregon for two shows with Z Man (Oakland) and DJ L Nasty (Boise), at The Haul in Grants Pass on Friday, Sept. 18, and The Granite Taphouse in Ashland on Sat., Sept. 19. The show at The Haul is all ages.

RVM: You live in rural Eastern Oregon, which is about as close to the middle of nowhere as exists in the U.S. How does that change the way you go about being a musician and performer?

OSO: Fortunately the geographic location of Eastern Oregon is pretty ideal for traveling out west. Everything is so far apart out here, but I’m kind of in the center of a hub. Vegas, Denver, San Francisco, all about 12-14 hours away. Seattle, Portland, Ashland, Missoula, Reno, Salt Lake, Jackson Hole- about 5-7 hour away.

RVM: Also on that topic, hip hop is generally considered to be urban music. Does a rural environment change the sound or themes?

OSO: The breadth of hip-hop has expanded beyond just an urban environment, and has been there for some time, but I imagine not everyone knows that if they’ve only had commercial/superficial exposure. One of the things that drew me to Outkast & Goodie Mob when they first emerged was their organic sound and references to nature. Same with Arrested Development and Pharcyde, among many others. I have never lived in a full-fledged urban environment, but if I did, I am pretty sure my sound and themes would be ratcheted up quite a bit.

RVM: A lot of the new model involves emcees buying beats from online marketplaces, oftentimes from producers they’ve never met or worked with personally. Do you feel that detached manner changes the music?

OSO: I don’t think someone should be confined to ill-suiting or poor quality beats because of their geography or social circle. The internet has democratized music, giving emcees access to beat makers/producers they formerly couldn’t have access or exposure to.  I think it’s good to be able to detach from the local politics, egos, etc, that can cloud any form of art. Personally, I try to work with producers who want to work with me and are excited to do something together.

RVM: Hip hop is the dominant form of pop music, but its independent and underground scenes don’t seem to attract the same level of fan devotion as rock.

OSO: Everyone thinks they can rap, or actually raps, or has someone they know who raps. And there are so many beats out there that anyone can put together what resembles a song or album. It’s both supersaturated and watered down. Putting a rock band together pretty much requires at least two people who can kind of move their hands and mouths in opposite directions at once. There are people who claim they rap and literally stand on stage and rap along with their album vocals as it plays. People have been exposed to such low levels of content, originality, and performance on so many occasions, I think they just have given up on the field, writing it off in general, or not understanding the truly appreciable elements. The indie hip-hop bubble burst over a decade ago, leaving few survivors.

RVM: Also on that topic, since you tour a lot in the underground scene, where is it really cracking that people wouldn’t expect?

RVM: Unkie O is about a year old at this point, and you tend to have something new pretty consistently. What’s next? More collaborations? More solo work?

OSO: I have the five track Keyholes EP due out this fall, produced by Ph8 (Taos, NM), who made 2 beats on the Unkie O LP. He’s mixing and mastering the EP, and will also be featured on it, emceeing with his group Po.10.cee. Sometime in the next six months, a stand alone track I’m really excited about that I already perform live, called “Solitude,” will be included as part of an Artist Tree Entertainment compilation out of Memphis, TN.  Also, there are several collaborative tracks on other people’s projects that I will be featured on, mostly in Idaho, but also Nevada & New Mexico.