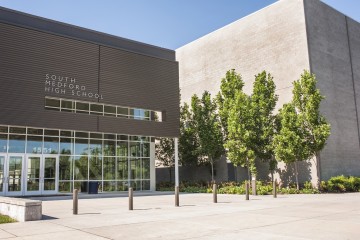 Phil Busse / September 17, 2015 / 0
Entering his second year, Superintendent Brian Shumate counts his victories and stares down challenges   In early February 2014, teachers from the Medford School District went on strike. For months prior, teachers had expressed concerns about middling salaries and what they complained were poor working conditions. In a press statement

Phil Busse / September 17, 2015 / 0
Somewhat quietly, and with little public attention, the newly enacted Board of Trustees for Southern Oregon University unanimously voted to extend the contract for interim President Roy Saigo beyond its expiration date of next June. Saigo has served as president for one complete academic year, and entere his second full

Phil Busse / September 3, 2015 / 0
With school returning, it is often a time for renewed school pride. But over the past 18 months, a story has been unfolding at the University of Oregon that casts a dark shadow over the state’s largest school—and, more directly, questions the importance placed on sports that has overwhelmed decency and morality. A year and half ago, a female student
Drink Local/Food

Phil Busse / September 3, 2015 / 0
Climate City Brewing is not quite a year old and already has found its footing. The third contemporary brewery in Grants Pass, Climate City is actually drawing from the city’s turn-of-the-century history (as in, 1900s, not 2000s) to bring something new to the area—and the results are wonderful. Not only
Sports & Outdoor

May The Force Be With Your Two Wheels

Phil Busse / May 28, 2015 / 0
Return on the Jedi mountain bike race rounds out season In 1996, Bill Clinton was entering his second term, the first blog was launched, the global temperature was some few degrees cooler, and mountain biking was still a relatively new sport, and the equipment was crude, little better than big