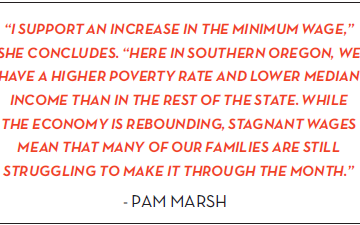 Phil Busse / February 3, 2016 / 0
Pushing for $15 an Hour is the Most Dominant Legislative Discussion As the state legislature began to gather for its session, Governor Kate Brown announced a six-year plan to steadily raise minimum wage in Oregon—and, in doing so, struck the dominant chord for upcoming conversations about law-making in the state.

Phil Busse / February 3, 2016 / 0
The name of the study is foreboding: “Sentenced to Debt: The Hidden Costs of Unaffordable Education.” But, released earlier this month, the report perhaps doesn’t bang the alarm bells loudly enough. Compiled by Oregon Action and Alliance for a Just Society of Southern Oregon and Rogue Community College, the report
News

Phil Busse / January 20, 2016 / 0
In early January—a few days before President Barack Obama delivered his State of the Union address—City of Ashland Mayor John Stromberg gave his State of the City address. “Nationally, 2015 was a tipping point year,” he began, “by which I mean that on multiple issues a significant number of people
Feature/Our Annual Restaurant Guide

Phil Busse / January 20, 2016 / 0
The difference between a supper club and a steakhouse may seem like semantics; after all, most supper clubs serve a choice of juicy steaks and most steakhouse have the egalitarian elegance of a supper club. But there is an important difference. Supper clubs are a distinctly American invention that boomed

Phil Busse / January 20, 2016 / 0
Ever since a motley crew of anti-federal government militia settled into the Malheur National Wildlife Refuge, there has been a certain amount of chiding about the so-called Oath Keepers, most cleverly done (in our opinion) by Portland-based Colin Meloy, the lead singer for the Decembrists, who posted six hours of
Drink Local/Food

Phil Busse / January 7, 2016 / 0
It isn’t quite brewery row, but it is a pretty impressive start. With Climate City rejuvenating a turn-of-the-century brewery at the top of G Street, and The Haul a few blocks south on H Street, Griess Family Brew sits mid-point. It is, like its name states, a family affair. Mom

Phil Busse / January 7, 2016 / 0
A year ago, Caitlin Jenner was still Bruce, and Donald Trump was a reality TV show shtick, not a possible reality for America—and both of those individual changes mark significant changes over the past year. Gender politics have evolved quickly over the past two years with same-sex marriage receiving its 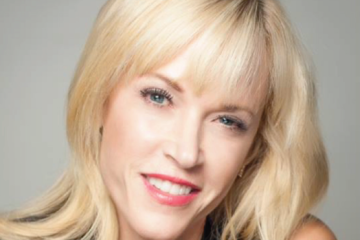 Phil Busse / January 7, 2016 / 0
One reviewer explains that Sheila Hamilton approached the sensitive topic of her husband’s suicide with “a reporter’s eye and lover’s heart.” In All The Things We Never Knew, Hamilton, a well-known radio personality in Portland, re-examines her life with her husband. A decade ago, he was diagnosis with bipolar disorder.

Opposition Is Welcoming: Small, But Expanding, Medford’s Up and Comer

Phil Busse / December 17, 2015 / 0
Opposition Brewery is not easy to find, pushed inconspicuously in an office park in Medford. But inside, the space is welcoming and the three patrons there immediately beamed when I entered. We had chosen Opposition Brewing for The Messenger’s holiday party, partly because we did not know much about them,

Phil Busse / December 17, 2015 / 0
I attended college in a small town in Vermont. It was a tight enough knit community that the cashier at my bank also moonlighted as a waitress, and knew me—and my account—well enough that she once advised me to order a less expensive dinner because she knew I should budget