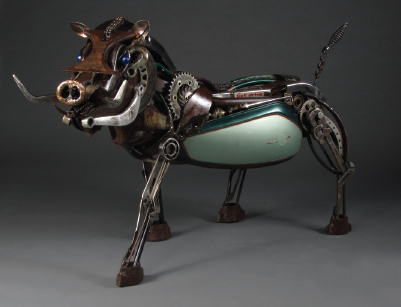 Although each distinct, a trio of artists currently showing at Rogue Gallery & Art Center manage to triangulate notions about the cool and tense relationship between industry and humanity; or, perhaps, more accurately, about how technology is erasing something vibrant in the living.

The exhibit that began August 5 and running through September 16 showcases the sculptures of Oregon native Jud Turner, Illinois painter James Deeb, and Utah-based printmaker Justin Diggle. Each artist brings a different medium to the exhibit, though all share the similar theme of darkness, as if each piece reveals something about our culture.

Executive Director of Rogue Gallery & Art Center writes in a press release, “Turner’s sculptures are visually engaging, using symmetry, repetition, and intricate detail to balance the darker contemporary themes he explores such as the balance between nature and technology, mortality, the passage of time, and transportation.” His sculpture “Hyrum Tyrus” looks like a mechanical animal one can ride. Its blue marble eyes are cold, contrasting with its rust-colored and pale green body.

“I am interested in playing with notions of contradiction in my work,” says Turner. “It’s also a path to examine the ways that industrial technologies and the natural world interact, overlap, and sometimes conflict.”

In “Acrophobia,” James Deeb uses mild earth tones to represent a mundanity or lack of meaning in his painting. He improvises often in his work, “to take advantage of the unintended outcomes,” he says.

About the themes in his work, he explains, “Each piece has its own theme, ranging from shunning/scapegoating, forgiveness (and its limits) to simple contrariness. I try not to be overly explicit with my ideas, however, to allow viewers room for their own interpretations.”

Justin Diggle’s says, “My work is primarily based around the theme of surveillance.” His work not only focuses on the machines of surveillances, but also the motivations of those watching. His print “Controlling Identity” refrains from using any color––only black, white, and shades in between––to reflect what’s inside man. Yeah, harsh, but beautifully so.