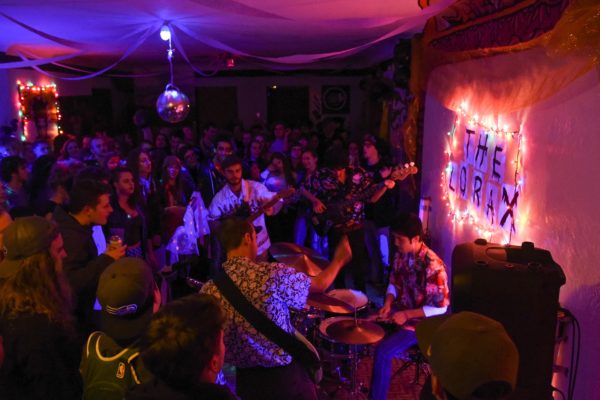 About the only obvious connection between jazz and emo is that they are both genres with hard-core devotees and equally hard-core haters. But for Eugene band, Spiller, who will make their first appearance in Southern Oregon with a pair of shows at Oberon’s in Ashland on Sunday, Dec. 17, and King Wah’s in Medford on Monday, Dec. 18, it’s an obvious match. The Eugene band blends the nuanced rhythms and clean textures of both styles for their own hybrid take on rock. Guitarist and vocalist Sam Mendoza took the time to answer a few questions for The Messenger to preview the shows.

RVM: What is the band’s backstory? How did you all get together?

SM: We formed at the beginning of our freshman years of college in a dorm filled with music students and enthusiasts. We started jamming and writing songs and practicing together in a basement drum room. During winter term we played our first house show, and have been building momentum ever since.

RVM: You’ve described your sound as blending jazz and emo, two styles that appear to have nothing in common. What’s the connection, and how do you blend them?

SM: I think the emo/indie/math rock part comes out from music that we would naturally write, and the jazz from everything we’ve absorbed in music school. We mostly play loud rock shows and we have the appearance of a rock band, but we like to improvise and play our songs differently every time.

RVM: What drew you your sound when you got together? Was it a deliberate choice or a natural evolution of combined elements?

SM: The evolution felt natural. Our writing has changed quite a bit since our first EP, and I think it will continue to change. We chase the ideas and sounds that inspire us.

RVM: Your sound on your EP, Reuben + Cold Cut, is a bit all over the place rhythmically, shifting tempos and accented beats pretty consistently. How would you describe the proper dance moves?

RVM: Will this be your first time performing in Southern Oregon? Any thoughts or expectations?

SM: This will be our first time playing in Southern Oregon. So far we’ve only visited Ashland and Medford briefly, but we’re excited to play in both towns.

RVM: What’s on the radar for you?

SM: We’re hoping to get on a festival or two this spring and summer. We will definitely be hitting the road as well during those times.

Spiller, with Derek Deon & the Vaughns, and The Elephant

Spiller, with Your Hands Write History, and Hostages