Beer and yoga seem like the unlikeliest of combinations. Then again, people experience both things to “loosen up,” so why not put them together?

As unlikely as it is exciting, Beer Yoga at Walkabout Brewing Company kicked off a month ago—May 5 to be exact—with just a few attendees, yet the number is steadily growing each time.

“I wanted to do something unique that would bring people to our outdoor space,” says General Manager Cameron Litton. The long stretch of lawn on the brewery’s property has hosted several outdoor events since the beginning, including concerts and weddings.

“I was thinking about trying beer yoga when a local group called the Rushmore Society asked to host a yoga class at our facility! We tried it out and had a great turnout, so we decided to make it a more regular thing,” says Litton.

The Rushmore Society aims to host 10 to 14 events a month. The goal is to get people outside, engage with others, and find a sense of adventure in each activity they do. “Pints and Poses” was one of those events. “Beer and Yoga is the perfect combination because both help you get a little loose and put a smile on your face,” says Fischer.

Head Organizer of the Rushmore Society Murray R. Fischer explains how the first event was called “Pints and Poses,” and the main idea behind it was to have a beer in one’s hand throughout the class. “Basically, we tap into the talents of local businesses, put a little twist on something (let’s combine beer and yoga, while maintaining hold of the beer throughout, who could we set that up with?) so that it stands out from the crowd and helps promote [local businesses.]”

Attendees will be able to get any one of Walkabout’s beers during the event. So far beer yoga is every Thursday, with the next one being Thursday, June 7, weather permitting. Yoga Instructor Nanci Traynor teaches all skill levels, so even those who have never done yoga before are welcome.

“Ten years ago I would have thought this was a stupid idea, just because I’ve seen so many yoga cults and other fads just to make money 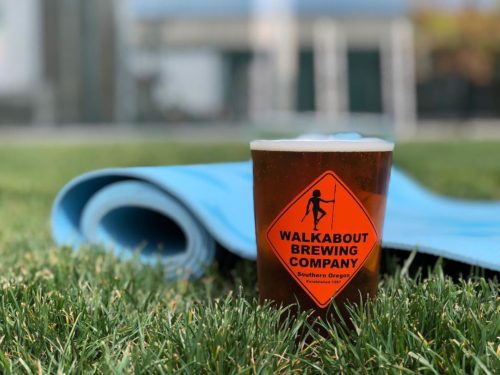 off of this ancient practice that the west knows nothing about,” she says. “So many are put off by the lack of their flexibility, or the breathing practices or the ethics that it teaches or we have vices that we would like to hide. Yoga teaches honesty with ourselves and honesty with our external environment. Let’s be honest. Let’s not hide and drink beer in class. Let’s drink beer in a safe environment. I also feel that the beer helps your average human let go a bit. Loosen up physically and mentally.”

Traynor explains how yoga is a tool used to stop suffering, which she hopes those who attend this event will experience. She also hopes this brings more people to Walkabout Brewing Co. because “they have a wonderful garden.”

The event is $15, includes a pint of beer, and lasts one hour.