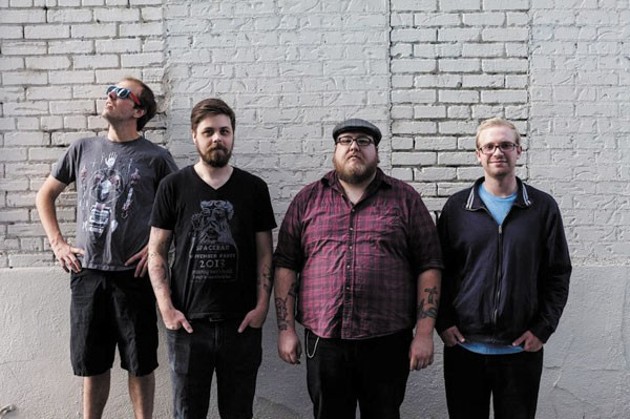 The formative years for musicians are important. Inspirations get mashed into one, and out comes someone’s own creativity. For high school friends Eric Larson and Joe Myers in Boise, instrumental post-rock, bands bands like “Godspeed You! Black Emperor” and “Explosions in the Sky” where these big inspirations. Their sprawling arrangements got Larson—an ex-punk—“really excited about song structure,” and he found it, “more of a challenge writing complex songs.”

So he and Myers, along with Myers’ brother Jake, and drummer Jessica Johnson formed an experimental band to bring together a beautiful blend of original sludge, post-rock, alternative, and atmospheric sounds bound together in sprawling cinematic arrangements. That band, Red Hands Black Feet, has survived eight years (with only one lineup change, Matt Stone taking over on drums), and will be returning to Medford for a performance at Johnny B’s on Wed., October 4.

The integration of sounds is meant to stand out. Though like most genres of music, there is use of repetitive structures for songwriting. RHBF likes to take the listener’s knowledge of this structure and turn it on them.

“[We] try and trick the listener,” Larson says.

All the music written in the band, including their last release We Must Fall Forever If We Survive, (a concept album about space flight) is a collaboration between its four members. Instead of writing song by song however, they put more of their time into writing with the overall structure of the album in mind, sometimes using a line-graph to plot out the rise and fall of the composition’s intensity. The band’s albums are supposed to be listened to as a whole, with each song trying to say something in particular. The slow builds and explosive endings are and emotional ride to say the least.

As a band without a vocalist, connecting to the audience can be difficult. Larson welcomes that challenged by taking full control of the environment that audiences steps into.

“[We are] the highest energy post-rock show people have ever seen,” he says.

They also bring custom-made lighting fixtures controlled by foot switches, to create an immersive atmosphere that transports listeners into a world of their own creation.

Larsen says that Red Hands Black Feet is currently playing around with a lot of ideas and basic outlines for new material, and that the performances on this tour will be full of improvisation. The basic ideas of the band’s new songs will be there, but with with an added spontaneity created right before your eyes.

[I hope this tour will] “light a fire underneath the band, and help us get a jump on the new album,” he says.